The highest award presented by the University of the Highlands and Islands. 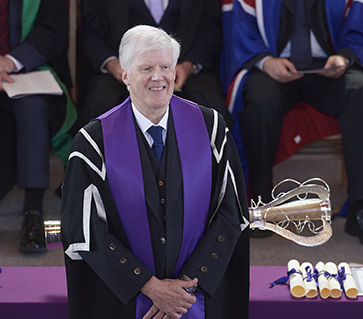 John Norman MacLeod was presented with the Chancellor’s medal by university chancellor, HRH The Princess Royal, at the Highland Theological College UHI graduation ceremony on the 5 July 2018.

A native of Skye, John Norman taught history at Plockton High School before being appointed lecturer in Gaidhealtachd Studies (Highlands and Islands Studies) in 1983 at Sabhal Mòr Ostaig UHI and subsequently was promoted to head of studies in 1987. Since 1998 he has acted as co-ordinator for the Gaelic and related studies scheme, which includes the Gaelic undergraduate and post-graduate provision, and was a subject network leader for Gaelic and other contemporary languages from 2003 - 2010. John Norman retired in July 2018 as director of studies and vice-principal of Sabhal Mòr Ostaig UHI.

John Norman has been an active member of various university committees - humanities and Gaelic faculty executive, Gaelic committee, academic planning committee and the learning, teaching and quality committee.  He was a member of the Sabhal Mòr Ostaig UHI board of management team and chaired a number of academic committees at the college. He is currently a member of the Scottish Government’s excellence group for Gaelic. 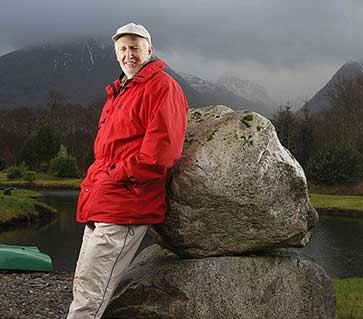 Dr Hamish MacInnes was presented with the Chancellor’s medal by university chancellor, HRH The Princess Royal, at the Perth College UHI graduation and University of the Highlands and Islands Foundation Day 2016.

Dr MacInnes, known as the ‘father of Scottish mountain rescue’, was awarded the University of the Highlands and Islands Chancellor’s Medal in recognition of his services to the development of mountaineering and mountain rescue.  With a career spanning more than six decades, he achieved several first ascents and is credited with pioneering modern mountain rescue.  He founded the Glencoe Mountain Rescue Team in 1961, the Search and Rescue Dog Association in 1965 and co-founded the Scottish Avalanche Information Service in 1988.

Dr MacInnes was nominated for the Chancellor’s Medal by West Highland College UHI which delivers the university’s adventure tourism management and adventure performance and coaching BA (Hons) degrees.  Speaking about his award, Dr MacInnes said: “It is indeed an honour to be here today to receive this award and I find it quite humbling. To be in the presence of HRH The Princess Royal, a true friend of Scotland, makes it a very special occasion.” 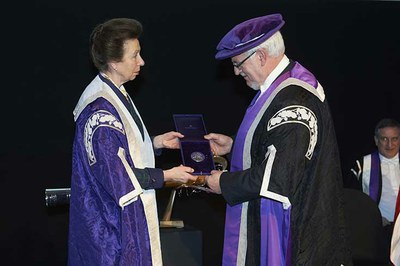 Professor James Fraser was presented with the Chancellor’s medal by university chancellor, HRH The Princess Royal, at the West Highland College UHI graduation and University of the Highlands and Islands Foundation Day 2013.

Prof Fraser was involved in the creation of three Scottish universities over the course of his career.  He was a pupil at Plockton High School before going on to the University of Edinburgh where he graduated in mental philosophy.  He also gained a Master of Education degree from the University of Stirling.

Prof Fraser joined UHI Millennium Institute as Secretary in 2002 and became deputy principal in 2007.  On the retirement of Prof Robert Cormack in 2009, he became principal of UHI Millennium Institute.  He subsequently led the higher education institute to university title and so became the first principal and vice-chancellor of the University of the Highlands and Islands in February 2011.  Prof Fraser retired from the university in December 2013.