The Peter May Fiction Prize

An annual prize of £1,000 for creative writing, donated by internationally bestselling crime writer and Scottish author, Peter May. content

An annual prize of £1,000 for creative writing, donated by internationally bestselling crime writer and Scottish author, Peter May.

Borrn and brought up in Glasgow, Peter May started his career as a journalist before embarking on a fifteen-year stint in the television industry as a writer, creator, and producer. He created and wrote many prime-time drama serials, including Take the High Road and Machair, before returning to his first love and becoming a full-time novelist.

He has now published over 20 books, including standalone novels such as Entry Island, Runaway and Coffin Road and the internationally best-selling Lewis Trilogy, a crime series set in the Outer Hebrides. He visited the Outer Hebrides for the first time in his 40s and then lived there for five months a year, over six years, whilst producing Machair. Peter says: "the islands feel like they have been a part of my life since the day I was born.” He is also the creator of the China Thrillers series, the Enzo files, set in France where he has been living for many years.

Peter received an Honorary Doctorate from the University of the Highlands and Islands in 2019.

"It had only been seven years since they had given it a name, the Exponential Arthropod Population Growth, or as it had become commonly called; the Bloom. At first it was something distant and remote. Crops devastated in Africa. The American central belt overrun. Diseases across Asia. Distant parts of the world with distant problems. Governments slow to respond. Just another catastrophe to deny and debate. Believers and unbelievers - none of them got anything done. All the while global ecosystems had collapsed and a biological new world order had destroyed the careful equilibrium of millennia." 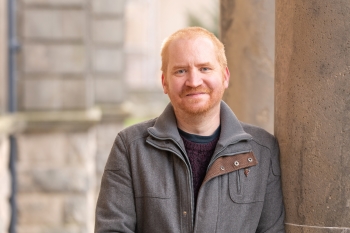 Peter May, who chose the winner from a shortlist of five, said:

"Gary’s work stood out. He draws us into the frightening, claustrophobic world of the research pod in this strange and compelling story. He vividly delivers a metaphor of acceptance and surrender to age, with its accompanying deterioration of the mind. I look forward to reading what comes next.”