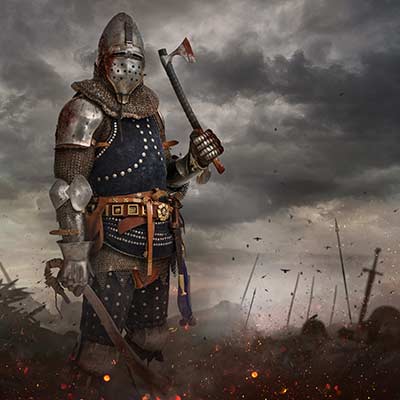 This developing area focuses on the medieval world as a source of imagination for modern popular culture. Films, TV, comics and computer games offer audiences convincing depictions of the past, and of medieval-like fantasy worlds with a medieval aesthetic. Such portrayals encourage popular interest in medieval history, and it is important that academic historians engage with such works to consider their historical influences.

This is particularly relevant in a political climate where far-right use and abuse of medieval images challenges historians to correct misleading views of the past influenced by rose-tinted medievalism. Examples in this area include MacInnes’s analysis of chivalry in Game of Thrones, consideration of medieval warfare in graphic novels, and comic portrayals of the Hundred Years’ War.

The medieval world is also big-business. Tourism trends reflect this, whether in tours of battlefields, visits to film locations, or promotion of national sites of memory.  Developments that utilise modern technology to uncover unknown/misunderstood elements of the medieval past are essential in presenting findings to a public audience. Key analysis of such includes Dean’s work on the Perth Charterhouse Project and MacInnes and Dean’s collaborative PhD projects on castles.

In these ways the medieval worlds and medievalisms research alliance seeks to develop a new and exciting element of research at the Centre for History, and create world-leading expertise around these themes.

See Iain talking about his research.

See Lucy talking about her research.