Many Scottish plants have a long tradition of use as sources of medicines, flavourings, fragrances, dyes, cosmetic products and for other specialist purposes. Our region has a unique but varied range of growing conditions which have important effects on the vegetation and crops which grow in the region and on the chemical composition and quality of plant products. Moreover, the unspoilt Scottish environment has an excellent marketing image, making the area potentially very attractive for the production of plant-based natural products.

Our natural products research programme has focused both on traditionally used Scottish plants and on newly introduced species and has included plants used medicinally (e.g. arnica (Arnica montana) and daffodils, (Narcissus spp)) or in cosmetics (e.g. sweet gale, Myrica gale) as well as several species of northern berry with potential for food and drink uses.

Our natural products research programme has focused both on traditionally used Scottish plants and on newly introduced species and has included plants used medicinally (e.g. arnica (Arnica montana) and daffodils, (Narcissus spp)) or in cosmetics (e.g. sweet gale, Myrica gale) as well as several species of northern berry with potential for food and drink uses.

Sweet gale, or bog myrtle (Myrica gale), is a deciduous shrub which is native to Scotland and is particularly common in high rainfall areas, like the north-west of the country, where it can be found from sea-level up to about 500m. It appears to grow best on wet, but well-aerated soils and has nitrogen fixing root nodules and cluster roots, allowing it to grow on nutritionally poor soils. 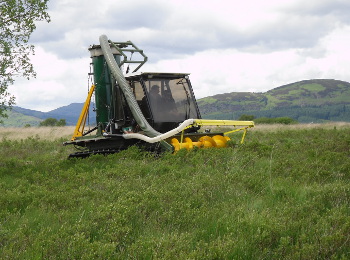 Sweet gale has a tradition of use in many countries for diverse purposes and, most recently, wild-harvested shoots have been used as a source of an oil for cosmetic products by Boots Plc. As a result of the high costs of this operation, interest focused on developing sweet gale as a crop for planting on farmers’ fields. With no tradition or knowledge of cultivating sweet gale as a crop, Boots Plc contracted the Agronomy Institute to investigate aspects of the plant’s cultivation in a project running from December 2007 to May 2011. 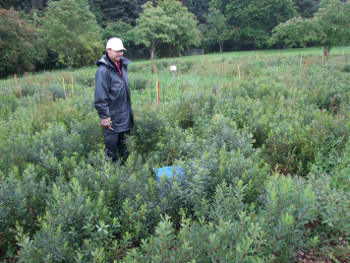 As part of the project, the Agronomy Institute established trials, each containing about 1,000 plants, at 6 different locations in the north of Scotland. These were monitored over three years and two harvests to provide information on aspects like plant survival, growth, shoot yield, shoot oil content and the incidence of pests and diseases. Soil and climatic data were also collected from trial sites to look for relationships between these factors and plant growth. Other topics, investigated in Orkney, included the use of different types of planting material, investigation of different weed control strategies and the response of sweet gale to fertiliser.

This study was undertaken for Agros Associates with a HIE Business Innovation Grant from 2010-2011. It identified a number of plants with potential for the following end-uses:

Routes to market were also identified for these species.

Orkney Wine Company produces a range of fruit wines and liqueurs using non-grape ingredients. With help from a Scottish Funding Council innovation grant in 2012, the Agronomy Institute helped the company identify and source unusual, locally grown ingredients to produce unique wines with a high content of local ingredients. All of the species being used have grown and yielded well in Institute research trials since 2004.

The collaboration has been assisted by chemical analyses of the fruits and wines carried out by The James Hutton Institute. During 2014, with additional support from a TSB Innovation Voucher, further assistance was provided by the research partners, and the company is being helped to establish its own fruit garden containing aronia (Aronia melanocarpa), cranberry (Vaccinium macrocarpon), elder (Sambucus nigra) and salal (Gaultheria shallon) to increase supplies of selected fruit species.

The first commercial products from this collaboration include: ‘Orkney White’, a white wine containing local elder flowers, gooseberries and rosehips; ‘Orkney Rosé’, which contains aronia, salal and cranberry; ‘Viking Red’, a red wine which includes aronia and cranberry; and ‘Kvasir’, a liqueur which includes salal, rosehips, cranberry and elderberry. 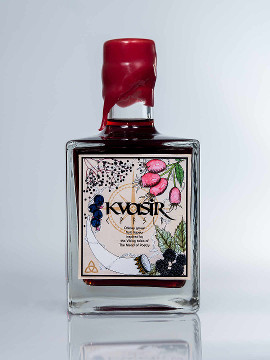 Orkney Distilling Ltd was established as a company in 2016 and is building a new distillery on the Kirkwall waterfront which will also feature a visitor centre. In collaboration with Strathearn Distillery and with help from the Institute, the company developed its first product, Kirkjuvagr gin, in 2016. The Institute helped the company by providing it with a range of botanicals from plants in its trials and the company selected the best of these for inclusion in Kirkjuvagr gin. One of the key botanicals in the gin is angelica (Angelica archangelica) which was grown from seed originally collected from a wild stand of this plant in Westray. The occurrence of this stand is unusual but is thought to have existed for at least one hundred years and, in the past, was attributed to an introduction by Faroese fishermen. In 2017, the AI helped ODL establish its own botanicals garden so that it has its own source of locally grown botanicals. 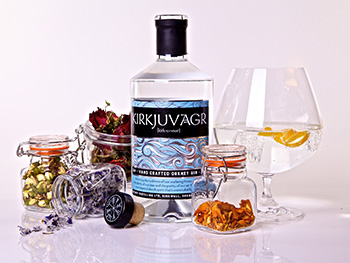