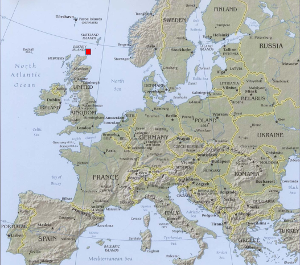 The county stretches 53 miles (83 kilometres) from north to south and 23 miles (37 kilometres) from west to east; approximately 240,00 acres (100,000 hectares) in size. It is an archipelago of c90 islands, the largest of which is referred to as Mainland. The coastline is 550 miles long (880 kilometres) ranging from near-vertical cliffs to rocky, sandy and muddy shores, approximately 13.5% of the total coastline of Scotland.

Much of Orkney is fertile, with a predominantly farmed landscape; its soils are derived from sedimentary rock of Old Red Sandstones formed about 380 million years ago in the Devonian, except from some small patches of granite-schist complex. The climate is described as ‘hyper-oceanic’ with little variation in temperature between summer and winter months.

The Orkney island have a considerable number of different habitats ranging from coastal cliffs and beaches, maritime heath, farmland, roadside verges, wetlands, moorlands and woodlands (Berriedale in Hoy is the most northerly native woodland in Britain). These habitats support a wealth of biological diversity. The Maritime situation and northern latitude result in the occurrence of many species which are internationally threatened and nationally rare.

Orkney supports a considerable botanical diversity having c520 native and c210 introduced species of plants. Surprisingly, it has less than 30 percent of the flowering plants found on mainland Britain but does include 21 species of wild orchids. The Orkney plant composition is very interesting, having areas of both Alpine and Arctic plants growing alongside plants of more temperate habitats. The flora is strongly influenced by the weather and the close proximity of the sea everywhere on the islands. 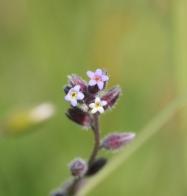 Orkney’s ‘hyper-oceanic’ environment gives the unusual situation of having productive grasslands, low lying maritime heaths, wetlands, moorlands and low-lying tundra mountain vegetation (with Arctic bear-berry on the Hoy hills) within a short distance of each other. Plants such as the artic coastland Oysterplant, thrive along the shoreline of Orkney.

Grass of Parnassus is common on verge sides, along with over 20 other species of wildflowers. Grasslands and green pastures filled throughout summer with buttercups far outrivaling anything occurring further south.

Farmland meadows, pastures and fields provide food, shelter and nest sites for breading waders such as lapwings, curlews and ringed plovers. Orkney’s wetlands host a number of rare species such as black-tailed godwits and pintail along with the more common redshanks, snipe and curlews. Over-wintered crops and stubble fields provide a food source for many wintering farmland birds such as , twite, reed bunting and skylarks.

There are a variety of habitats along the diverse coastlines of Orkney, from high cliffs, sandy and rocky shores, to the sheltered coasts of Scapa Flow and salt marshes. The coasts and cliffs are a famous breeding site for many sea birds including kittiwakes, guillemost, fulmars, razorbills and puffins.

The seas surrounding Orkney are a dominant feature of the islands, providing rich diverse interest all year round. During the summer nearly half a million seabirds breed on the cliffs and moorlands of Orkney. In the winter months, the sheltered waters of Orkney provide a home to a large number of wintering seabirds, such as great northern divers, long tailed ducks and slovoian grebes.

The sea mammals include common and grey seals. Throughout the year harbour porpoises and other cetaceans such as minke and killer whales use the waters around the islands.

Brown hares are very common around the islands as are rabbits, whilst Hoy holds a small population of mountain hares. Otters are also present but not as prolifically as in neighbouring Shetland. Orkney also has an endemic species of vole thought to be a relic of a previously widespread north-west European population.