We have an important research programme investigating the potential of biomass crops as sources of wood fuel for windy, northern areas like Orkney.

This research is driven by: 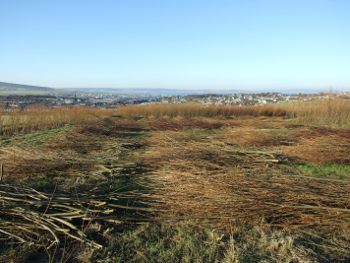 Our research on SRC started in 2002 with a small-scale trial on willow in collaboration with Orkney Housing Association Limited (OHAL) which was interested in the potential of the crop as a source of wood chips for its housing developments. Promising results from this trial led to larger areas of willow being established, principally to test a wider range of clones, at Muddisdale (2006) and Papdale (2007). These trials were aimed at identifying the best clones for the Orkney climate and quantifying biomass production. In total, the trials included 13 different clones which were commercially available at the time. Establishment of the trials also provided an opportunity to test different types of willow planter. 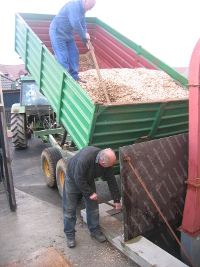 From 2008 to 2010 we were involved in the Northern Peripheries Programme PELLETime Project with partners from Finland, Sweden, Iceland and mainland Scotland. The project aimed to address shortfalls in pellet production by expanding the raw material supply and encouraging SME participation in the market. One of our contributions to the project was to run field trials investigating several crops as potential sources of biomass for small-scale pelleting. These included monitoring of the willow trials at Papdale and Muddisdale which was mainly carried out as part of an MSc research programme. Within the PELLETime project, a prototype small-scale willow harvester was developed by JLB Design Ltd. 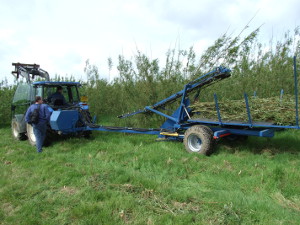 Collaboration with BBSRC Sustainable Bioenergy Centre researchers at Rothamsted Research and Imperial College between 2011 and 2013 helped to demonstrate a clone-specific effect on the composition of willow stems which increases the availability of sugars and occurs under conditions where reaction wood is produced (e.g. in windy environments). This could increase the viability of using willow as a source of second generation biofuels. 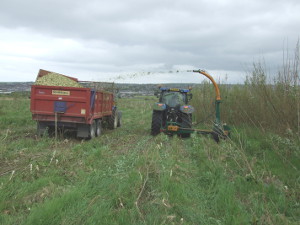 For short rotation forestry (SRF), trees are planted at a closer spacing (c. 2,000-3,000 trees/ha) than for normal forestry, but not as close as for SRC. Fast growing tree species are used, with the objective of harvesting them at about 15-20 years. Several of the species used can be coppiced so that they should regenerate after harvest. SRF is considered to be particularly suitable for the establishment of small areas of woodland on farms where the wood could have a range of end-uses, including firewood.

The attraction of SRF in Orkney is that land owners are often interested in planting small areas of woodland, usually for non-commercial reasons, and are already using a close spacing as this provides trees with mutual protection from the wind. Close planting, however, eventually results in a need for thinning out and for some species, coppicing may be necessary to prevent trees from becoming too large and susceptible to wind damage. Thinning out or coppicing could provide an opportunity for growers to use or sell the harvested wood for firewood, as the market for this has expanded considerably in Orkney, in recent years.

A major advantage of SRF for small-scale growers in remote areas is that harvesting and processing into utilisable fuel (split logs) can be achieved without the need for costly, highly specialised machinery. 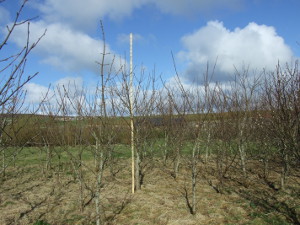 Since 2011, we have been collaborating with Forestry Commission Scotland (FCS) and local stakeholders to develop strategies for using SRF on the islands. In 2013, two SRF trials were established, one at Muddisdale on mainland Orkney and the other at Newfield on Shapinsay.

Both trials contain the same nine species (sycamore, Acer pseudoplatanus; Italian alder, Alnus cordata; common alder, Alnus glutinosa; downy birch, Betula pubescens; beech, Fagus sylvatica; aspen, Populus tremula; goat willow, Salix caprea; mountain ash, Sorbus aucuparia; whitebeam, Sorbus intermedia) and have a similar experimental design. We have continued to monitor the trials in collaboration with FCS and, since 2014, results from the Orkney trials have been included with those from others established by FCS to provide a nation-wide data set.

Tree survival was very good at both sites at the end of the first year, and although this continues to be the case at Muddisdale, there has been a marked reduction in survival at Newfield since the third year. At both sites the tallest species are common alder, goat willow and aspen, while the shortest: are sycamore, beech and mountain ash. Italian alder has also grown well at Muddisdale. 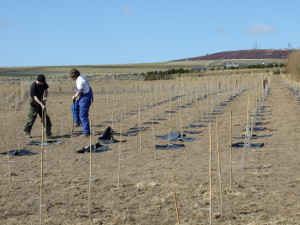 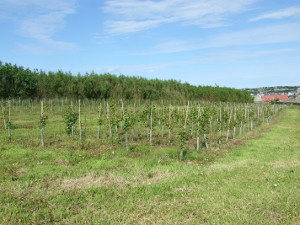