Our cereals research programme is aimed at developing new commercial opportunities for cereals in the Highlands and Islands and includes research on both old and modern cereal varieties. Apart from creating new markets for growers and food and drink companies, the programme also aims to increase self-sufficiency in rural areas, reduce the carbon footprint of the region's food and drink industry and conserve valuable crop genetic resources.

Our research on old varieties focuses primarily on Bere, a very old type (landrace) of barley which has been grown in the north of Scotland, especially Orkney, for hundreds and perhaps thousands of years. Research and development activities with Bere have concentrated on identifying best practices for growing it and on developing new commercial markets and supply chains for it. Apart from financial benefits for stakeholders, this provides a mechanism for conserving Bere in its region of origin.

With modern cereal varieties, we are involved in identifying early maturing UK and north European varieties suitable for growing in the north of Scotland to help develop niche markets. 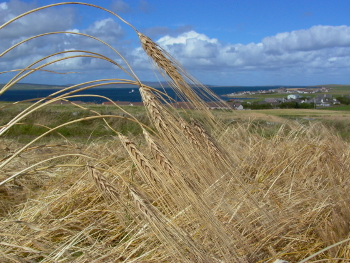 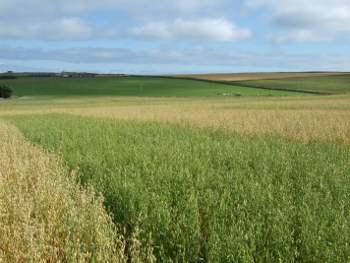 We strive to achieve early commercial outputs from our research and have developed several supply chains for end-users in the food and drink sector enabling them to develop new products. These include barley supply chains for Highland Park and Bruichladdich distilleries. 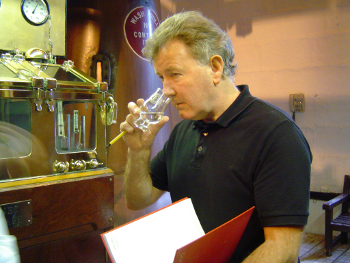 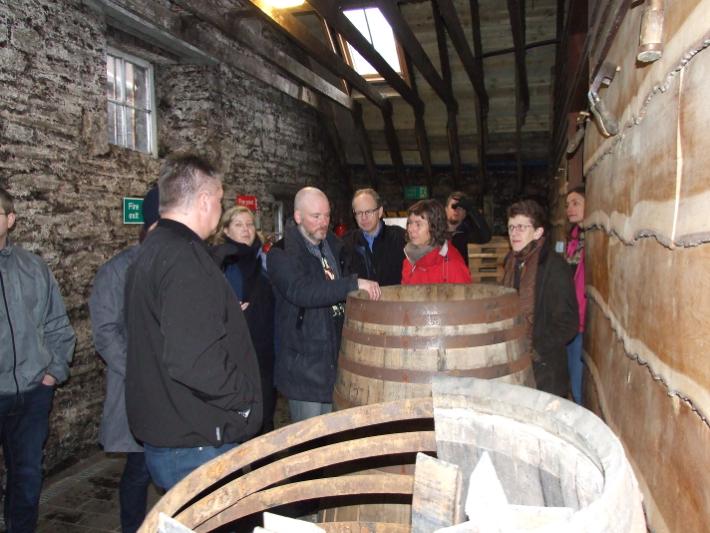 This project started in 2015 and is funded by the Northern Periphery and Arctic Programme. Project partners are located in Orkney (the Agronomy Institute), Iceland (MATIS and Agricultural University of Iceland), northern Norway (NIBIO), the Faroes (Agricultural Centre) and Newfoundland and Labrador (Forestry and Agrifoods Agency). The project is a response to increasing market opportunities for cereals and a changing climate across the partner regions and will seek to develop cereal production and markets for locally grown cereals. The project aims to build up collaborations between cereal growers and local end-users and, where appropriate, will develop higher value cereal markets.

Within the project, the Institute is supporting Orkney initiatives to produce cereals for brewing, distilling and milling. The project’s first annual meeting was held in Orkney in October 2015. 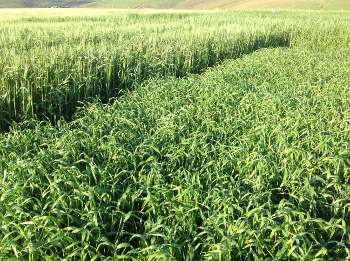 This project ran from 2014 to 2015 and involved the same partners as the Northern Cereals - New Markets project. The project developed as a result of a mutual perception amongst the partners that cereal growing in the region, although still very challenging, has been favoured in recent years by a number of factors, including new varieties, a revival of interest in “local” production and by changes in climate. The project was part-funded by Nordic Atlantic Cooperation (NORA) and was instrumental in initiating a collaborative research relationship on cereals across the region. Partners tested several common barley varieties in trials, carried out a baseline study of the current cereal growing situation in the region and developed guidelines for growers. Within the project the Institute carried out cereal-related activities in both Orkney and Shetland. The work in Shetland was in collaboration with Shetland Livestock Marketing Group and SAC Consulting and was supported by a grant from the Mains of Loirston Charitable Trust. 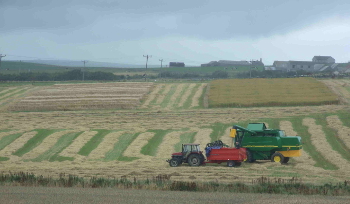 This project involved collaboration between some of the main research providers to the Scottish Government (The James Hutton Institute and Rowett Institute of Nutrition and Health) and several Higher Education Institutes (UHI and the Universities of Aberdeen and Dundee) to investigate the health benefits of oats and barley. A high consumption of whole-grain foods is associated with a lower risk of coronary heart disease, hypertension and type 2 diabetes. One of the most important factors determining the health benefits of whole grain foods is thought to be their β-glucan content and the project looked at the range of factors which can influence cereal β-glucan content - from genes to varieties, growing conditions and grain processing - and also investigated effects of specific cereal products and different β-glucan fractions on gut microbiota and health parameters.

The Institute supported the project by providing it with a north of Scotland research and trials facility and from 2012 to 2014 established trials with different varieties of oats and barley, including traditional landraces and Swedish varieties, to compare their growth and the nutritional content of their grains. Since several varieties were also grown in trials in more southerly areas, the project was also able to investigate the effect of Orkney’s more northern growing conditions on the nutritional content of grains of these varieties. 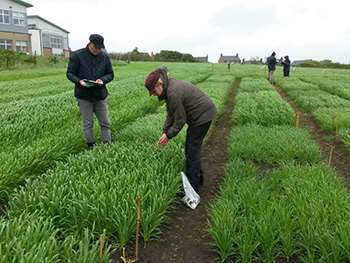 This project is funded through the Scottish Government’s Rural and Environmental Science and Analytical Services Division (RESAS). As part of a wider research programme supported by RESAS on Biodiversity and Ecosystem Function, the Institute is collaborating with researchers at the James Hutton Institute (JHI) to investigate genetic diversity and local adaptation in Scottish barley landraces. Through the project, the partners aim to help preserve and utilise novel genetic diversity which exists in landraces to improve the sustainability of the Scottish barley crop which is nationally important for the high value distilling and brewing industries and also for animal feed. A key aspect of the AI’s involvement in the project is that many of the Bere accessions come from the Northern Isles, and an Orkney trial site therefore provides an important comparison with that of the JHI which is near Dundee.

Research in 2016 and 2017 included the establishment in each year of heritage barley trials which included: 39 accessions of Bere (including 18 which have an Orkney or Western Isles provenance); 7 accessions of other Scottish landraces; 15 accessions of Scandinavian landraces; 42 accessions of non-Scottish British landraces; and 12 modern varieties. In addition to producing seed for larger-scale trials, phenological traits, growth and production data were collected on all accessions while tissue and grain samples were used for mineral analyses and genotyping. In 2017, the trials programme was extended to include a sandy nutrient-deficient site where tolerance to manganese deficiency was investigated in collaboration with the University of Copenhagen. 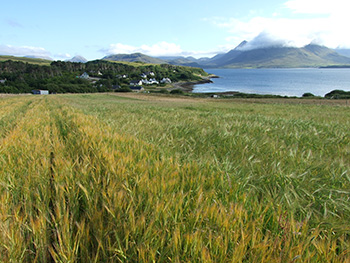 Raasay and Borders (R&B) Distillers Ltd encompasses two whisky distilleries, one in the Borders and the other on the Hebridean island of Raasay, near Skye. The distillery on Raasay was opened in October 2017 and is the first legal distillery on the island. The company is keen for the whisky to have as high a local content as possible and in 2017, the Institute helped the company and a local farmer investigate the feasibility of growing barley on Raasay for the distillery. As part of this research, a barley variety trial was established on the island and grain from the early maturing varieties which were harvested will be malted and used by Raasay Distillery for whisky production in 2018. This was the first time, in living memory, that barley was grown on the island for grain. 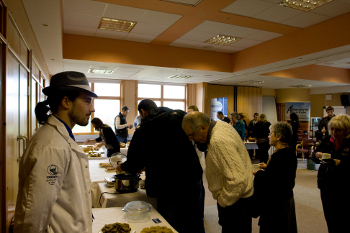 This project was funded by the Scottish Executive’s Food Processing and Marketing Co-operation Grant Scheme and followed on from a study by the Institute of the local market for Orkney flours produced by Barony Mill. The aim of the project was to develop the market for local flours by promoting collaboration between end-users and through raising awareness of local flours with the public. Project partners included Barony Mill, Orkney College Hospitality Department and several local food producers (Argos Bakery, Birsay Bay Tearoom, ER & T Craigie, Donaldsons of Orkney and the Foveran Hotel).

Within the project, flours from locally grown varieties of wheat and oats were tested in a range of food products. These results were combined with data on field performance to identify the most suitable varieties for Orkney. In addition, the project included the development of posters, leaflets and a web site for promoting the flours and a food event at Orkney College and display at Orkney International Science Festival where products made from the flours were available for tasting. 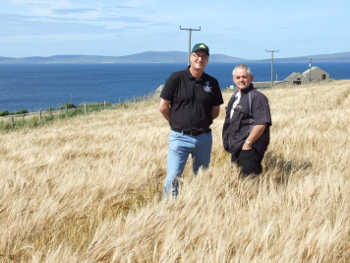 With funding from a HI Links innovation grant, the Institute ran a malting barley variety trial for Highland Park distillery in 2009. Based upon a combination of field performance and micro-malting tests on grain samples, the distillery selected the variety ‘Tartan’ as being particularly well- suited to Orkney and asked the Institute to develop a local supply chain for growing the variety. Since 2010, five local farms have each been growing about 2 ha of ‘Tartan’ and about 50t of grain have been delivered to the distillery each year. The grain is malted and distilled at the distillery and the spirit put into casks and stored on site. The aim, after several years of maturation, is to produce a specialist “all-Orkney” whisky. With seed of ‘Tartan’ no longer commercially available, the AI is also assisting each farmer to keep his own line of ‘farm-saved seed’ which is sent down to McCreath, Simpson & Prentice Ltd. for dressing and safe storage. The Orkney supply chain produces the UK’s most northerly malting barley.

Developing A Supply Chain For Bere With Bruichladdich Distillery 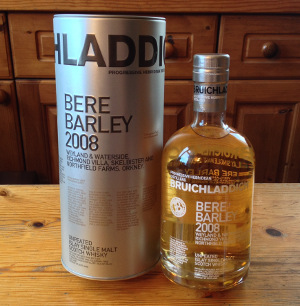 Collaboration between the Institute and Bruichladdich distillery started in 2005 and developed as a result of the distillery’s interest in high-provenance Scottish barley and its conviction that Bere spirit had unique characteristics which made it distinct from that of modern varieties. To supply commercially viable quantities of Bere to the distillery, the Institute formed an Orkney supply chain with local growers which has produced approximately 50 t of Bere annually for it since 2006. This is allowing the distillery to produce a succession of annual releases of single malt Bere whiskies and the first of these made from Orkney Bere (Bere Barley 2008) was released in 2014. An important element in the success of this supply chain has been the link with Bairds Malt in Inverness which still maintains facilities for malting this quantity of grain.

Major recognition for this collaboration came in 2015 when the Agronomy Institute and Bruichladdich Distillery were jointly awarded the 2015 Scotland Food and Drink Excellence Award for Innovation for their work in developing Bere whiskies.

Developing A Bere Whisky With Isle of Arran Distillers 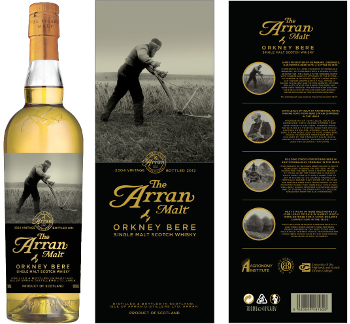 In 2004 when the Institute was in the early stages of developing its Bere research programme, it received Leader + funding to investigate potential new markets for Bere and collaborated with Isle of Arran Distillers in a proof of concept project to produce a whisky using Orkney-grown Bere supplied by the Institute. About 19 t of Bere were sent to Bairds in Inverness for malting and this was then distilled on Arran at Lochranza. After several years maturation, two limited edition single malt whiskies were released by Arran - one in 2012 and the other in 2014. The project demonstrated that Bere could be malted and distilled in modern distilleries without major problems and, most importantly, produced a very well-received whisky. 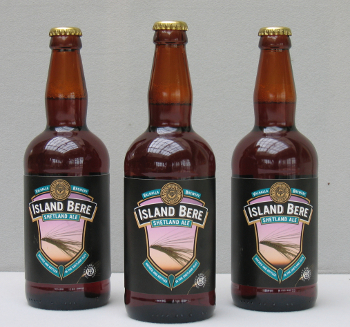 Also with Leader + funding, the Institute collaborated in 2005 with Valhalla Brewery in Shetland to help the brewery develop a beer made from Orkney Bere. The outcome was Island Bere which was released in 2006 and has remained one of the brewery’s core products since then.