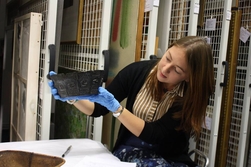 ‘Understanding the interplay between Scottish heritage and ancestral tourism’

Joanna joined the UHI Centre for History in October 2016. Her PhD research explores the interplay between heritage and diaspora/ancestral tourism in Scotland, through a multi-sited ethnographic study focused upon Tiree. The inner Hebridean island is claimed as a homeland by a self-described “Tiree diaspora” living around the world and residents have twice organised a community “Homecoming” for such visitors. Using the Homecoming events as a starting point, Joanna seeks to understand both residents’ and diaspora tourists’ perceptions of and engagements with personal, local and national heritages.

Joanna is delighted to return to the Highlands & Islands, having left Lochaber after school. Outwith her studies she makes the most of everything the area offers – wild camping, island-hopping, hill-running and the vibrant traditional music scene.

This project is funded by the European Social Fund and Scottish Funding Council as part of Developing Scotland’s Workforce in the Scotland 2014-2020 European Structural and Investment Fund Programme.