The island of Aitutaki is part of the Southern Cook Islands, situated c. 130 miles north of the largest island, Raratonga. Aitutaki is formed of one large island and a series of smaller islands (motus) running down its eastern side. This project is led by Professor Jane Downes and Professor Colin Richards, UHI Archaeology Institute. 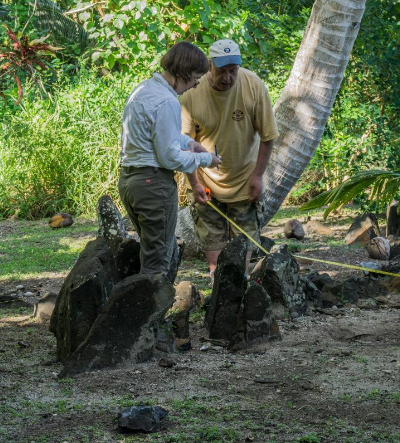 The archaeology of Aitutaki was initially brought to wider academic attention through the publication of ‘The material culture of the Cook Islands (Aitutaki)’ by Te hangi hiroa (Buck 1927). However, it was only through the 1968-9 survey work of the University of Auckland team, headed by Peter Bellwood, that a more systematic and detailed site record was produced (Bellwood 1978). Since this time little further fieldwork has occurred on Aitutaki, the exceptions being smaller interventions such as the unpublished partial excavations at the substantial marae of Paengariki (see section 5.1), and Melinda Allen’s research into adze production, for example, on Moturakau (Ditchfield et al. 2014). As part of the current survey, the adjacent island of Motu Rapota was visited and as Ditchfield et al. (ibid) report, clear evidence of adze (toki) production was detected. Spatial differentiation of production was discernible with a number of large hammer-stones being visible amongst at least two areas of basalt outcropping. Between the two outcrops, approximately 20m from each, a level area of c. 10-15m diameter was littered with small flakes and had clearly provided the context for secondary flaking. No evidence in the form of polishing stones or grooves on the outcrops for final polishing was observed.

The presence of marae on Aitutaki was highlighted by Te tangi hiroa, but detailed descriptions were limited and no complete site catalogue was produced in the final publication (Buck 1927). That the number and distribution of marae were potentially far more extensive than indicated by Buck (ibid), was noted by Robin Duff, a member of the Canterbury Museum team undertaking survey and excavation in the Southern Cooks between 1962-4 (Duff 1974, 20). Peter Bellwood’s Auckland team confirmed this observation and undertook a remarkable survey of the Aitutaki marae or atarau producing detailed site descriptions and plans over a two week period in February 1969 (Bellwood 1978, 90). Many new ceremonial sites were recorded and a corpus produced that is still of value today: indeed it is Bellwood’s data that the current survey employed as a benchmark in recording the condition and location of archaeological sites in 2017.

The 2017 report is available here......Download Provisional Report on Aitutaki Sites and Monuments