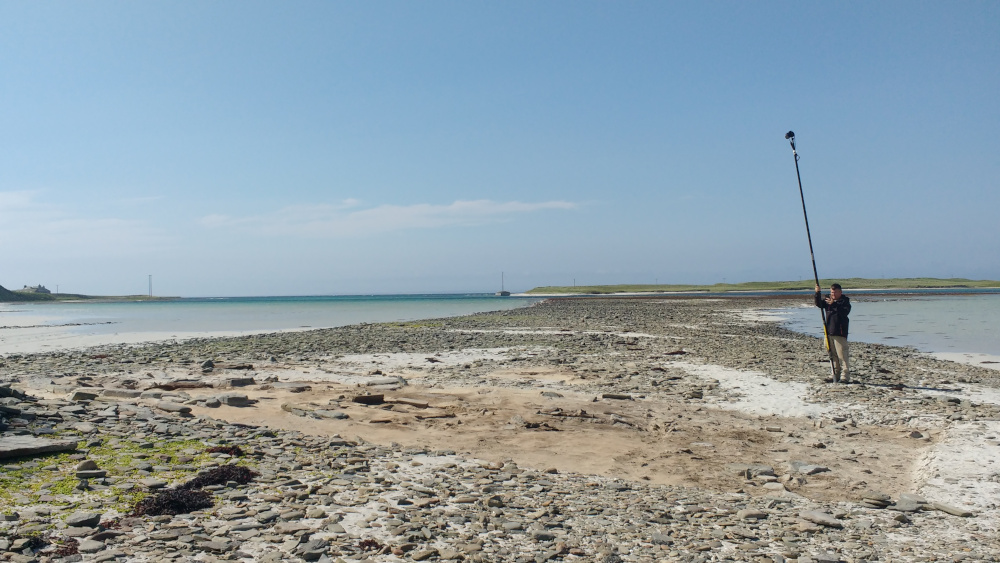 First, a new project entitled ‘Northern Exposure’ began by excavating an Early Bronze Age settlement at Loth Road. The research project is examining the period c 2400 – 1800 BC, which marks the transition from the Neolithic into the Bronze Age. As an ‘in between’ period, these centuries have tended to be neglected as researchers tend to work on the Neolithic (3700 – 2400 BC) or the Bronze Age (c. 2000 – 800 BC). In fact it is a fascinating period of time beginning with the abandonment of the late Neolithic ‘villages’ such as Skara Brae, Ness of Brodgar, and on Sanday, Pool. Around c. 2400 BC, communities appear to fragment and people live dispersed across the landscape in paired or ‘double’ houses. There seems to be a change in climate around this time, and across mainland Scotland we see the possible influx of new groups of people from the continent. These people are metalworkers and the first metal (copper) objects come into circulation and use. It does not look as if these immigrants get as far as Orkney, although they are present in Caithness. Nonetheless, judging from the abandonment of the villages, society appears to be disrupted from about 2400 BC in the Northern Isles.

However, it is precisely at this time that for the first time links become apparent between Orkney and Shetland, with materials being exchanged and similar house architecture occurring in both areas (also present on Fair Isle). So the big questions revolve around why were the villages abandoned, what effect did climate change have on their lives and why did the folk on Orkney begin to engage with communities in Shetland? Equally, what effect did the new populations moving through Britain (with ancestry reaching back across the north European plain to the Steppes) have on late Neolithic Orcadian society? 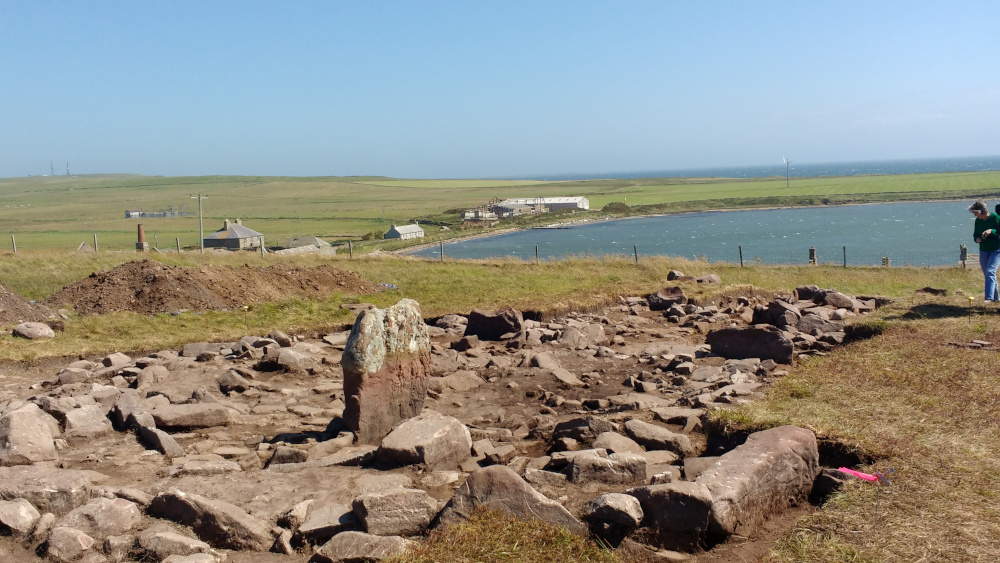 As one of the northern isles, Sanday is a good location to explore the beginnings of links between Orkney and Shetland, the Loth Road Early Bronze Age settlement comprises a double house (and possibly more structures) overlooking the Bay of Stove where a massive late Neolithic village is present several hundred metres away. Excavations uncovered some well-preserved houses, which had been decorated with cup-marks. These are small depressions normally found on rock outcrops or burial cists or mounds. This is exciting as it is the first example of such decoration in an Early Bronze Age domestic context, and more importantly shows links to Shetland where they are present on rock outcrops on Unst and Whalsay. Excavations will continue next year where it is hoped more material from Shetland will be discovered.

The second research project involved excavating the chambered cairn at Tresness, together with a contemporary early Neolithic house at Cata Sand. This fieldwork continues a project investigating the early Neolithic of Orkney and Shetland and includes house sites excavated in both places. The Sanday early Neolithic house site of Cata Sand is situated on a low rock spit projecting into the bay. This is a very dynamic environment which changed dramatically before and after the settlement was inhabited (c. 3300BC). Indeed, the landscape is changing today and one of the reasons this site was discovered was because an eroding sand dune revealed masonry and hearths. Investigations have uncovered at least two, and probably more, substantial houses – obviously these have been eroded by the sea (the site can be covered at high tide), but enough remains to enable us to examine house floors and hearths. The site became well known last year due to the unexpected discovery of large numbers of whales that had been buried in large pits just a few hundred years ago. The Neolithic houses are interesting because of their low lying coastal position. Investigations on Mainland over recent years at Stonehall, Smerquoy, Knowes of Trotty and Wideford Hill have found similar early Neolithic houses much further inland at the base of rising ground and clearly sited with regard to water sources. It will be interesting seeing if the inhabitants of the Cata Sand houses had a higher engagement with the sea. 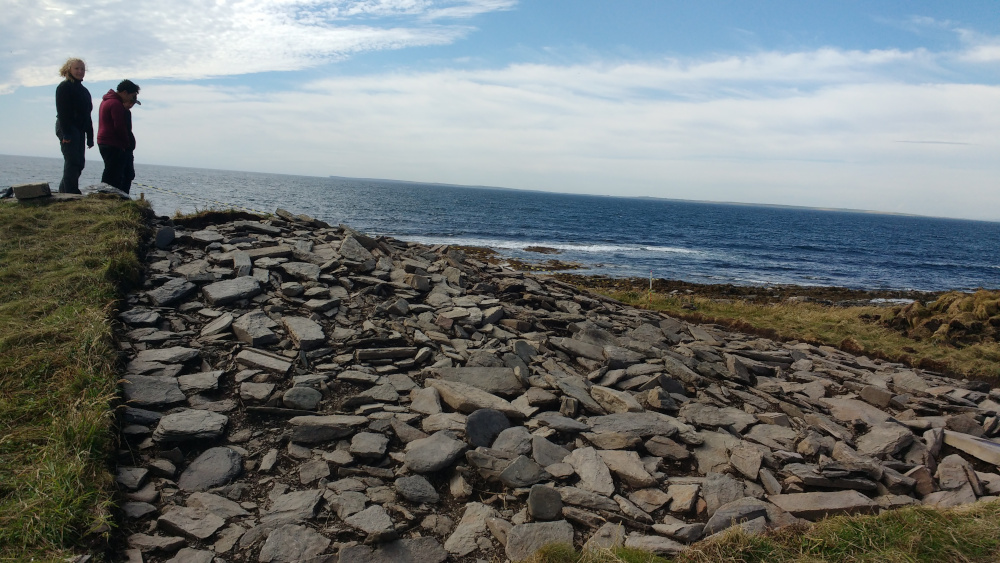 The final site examined is the chambered cairn of Tresness, which is roughly contemporary with the Cata Sand houses (c. 3500-3300BC). Again, coastal erosion is destroying this site and an excavation was mounted to explore the mound composition and burial chamber. After removing the flagstones over the chamber, it was found that a later wall had been built across the chamber. The wall is probably of later date and suggests the cairn was dug into in the Iron Age. This is a common occurrence in Orkney where Iron Age communities (c. 800BC – AD800), seem to target Neolithic tombs to enter and either build structures on top or nearby. This is unfortunate for archaeologists interested in Neolithic burial remains and practices! Hopefully, the later disturbance will be restricted to the entrance area and untouched Neolithic burial remains discovered next year.

Professor Colin Richards of the UHI Archaeology Institute said, “It has been interesting and exciting work on Sanday because our initial findings show us how different the islands were through prehistory. Furthermore the archaeology on Sanday for the period 2400 – 1800BC may well provide us with important information about why people stopped living in the big villages, and why they not only altered their domestic arrangements, but also began to turn and look northwards and to forge closer links with communities on Fair Isle and Shetland.”

At each site the landowners were very enthusiastic and helpful and we would like to thank Adam and Jimmy Towrie and Colin and Heather Headworth. A great many local people visited the sites and kindly helped the team in various ways, and are very much looking forward to returning next year, and expecting equally fine weather….The excavation is a joint project between the University of the Highlands and Islands and the University of Central Lancashire.

The site presents challenges of its own for the archaeologists as the structural remains are literally located on a sandy beach and, although breathtakingly beautiful, is exposed to all that the North Atlantic can throw at it. Erosion by wind and tide are just two of the issues facing the team.

The Historic Environment Scotland Board talk about the archaeology of Orkney in this video link.

Northern Exposure is a joint University of the Highlands and Islands Archaeology Institute and University of Central Lancashire project.