Coastal erosion, as a result of rising sea levels and the increased frequency of storms, is destroying archaeological sites across the globe.

In this article, researchers from the University of the Highlands and Islands Archaeology Institute and Bournemouth University examine the impacts of coastal erosion in Easter Island.

The ahu (platforms), with their moai (statues) are the iconic monuments of Rapa Nui. Hundreds of these complex ceremonial monuments encircle the island, the majority of them being located immediately on the coast. Therefore these monuments are particularly vulnerable to coastal erosion, and many are collapsing into the sea (Photograph 1).

The ahu comprise, on the landward sides, ramps which often have burial cists built into them. Surmounting the ahu are the moai, and fragments of moai were also incorporated within the ahu make-up as the structures were rebuilt over time. Further burials are often to be found at the edge of the ramps. Levelled areas – plazas – have situated upon them a variety of structures relating to ceremonies associated with the ahu such as dance platforms and boat houses.

The seaward side of the ahu, and therefore most eroded by wave action, were built as vertical walls created from basalt facing slabs. Damage to one of these walls can be seen in Photographs 2 and 3. 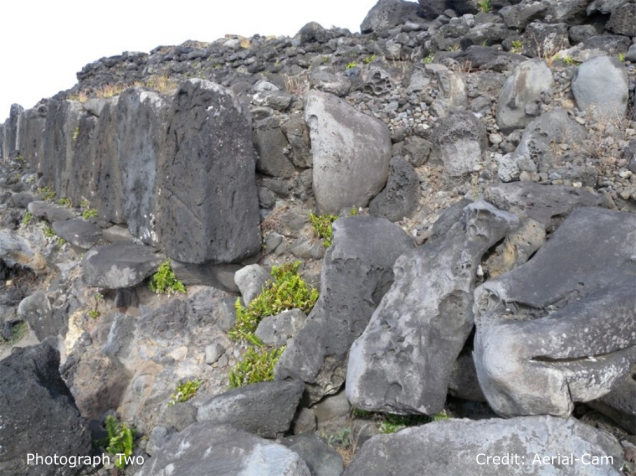 Situated typically behind the wall and therefore closest to the sea are crematoria, often stone built platforms where deposits of cremated bone can be exposed, and cremation burials either deposited within cists or as surface spreads.

Cremation was, unusually for Polynesia, the dominant burial rite during the image ahu-building era and afford an opportunity to learn much about the beliefs of the society as well as being a rich source of data about the population more generally. Cremated bone also could provide important information for chronology, but very little has been used for dating and none in recent times.

Canoe ramps were situated to the side of and extending beyond the ahu into the sea. Erosion of a canoe ramp can be seen in Photograph 4.

In a paper entitled ‘Coastal climate change impacts for Easter Island in 2100’ (L. Quilliam, R. Cox, P. Campbell and M. Wright, Rapa Nui Journal Vo.28 (1) (May 2014), coastal inundation was identified as one of the two main climate change impacts to the island  (the other being water supply). Stakeholders on the island felt that risk of tsunami was an even greater threat than coastal inundation. Ovahe beach is identified in the study as being at ‘serious risk of permanent inundation’ (ibid, 65); Photograph 5 shows waves breaking against an important crematorium platform.

In 1960 the reconstructed ahu Tongariki was destroyed by a tsunami originating from an earthquake off the coast of Chile, and the ahu was again reconstructed in the 1990’s (Photograph 6).

This site, along with Hanga Roa, Tahai and ‘Anakena are identified by the Quilliam et al study as being at highest risk of coastal inundation, with ‘wave runup forces’ having the ‘potential to damage the seaward ahu wall’ and therefore undermine the structure upon which the moai stand (Quilliam et al 2014, 63). These sites of reconstructed ahu with moai standing upon them are really central to the tourism industry and therefore to the economic basis of Rapa Nui.

As our illustrations show, there is ongoing wave damage to many other of the ahu, with a consequent loss of data relating to aspects of the ahu as a whole, and to the above-mentioned aspects that have been little researched. Cliff instability, which climate change has an unquantifiable potential to exacerbate as sea level rises may cause waves with greater energy and increase the rate of undercutting of the cliffs (Quilliam et al 2014, 65), threatens the famous bird man rock art at ‘Orongo, where parts of the sea cliff have already collapsed. Our aerial photograph taken at Poike shows that cliff instability also threatens the ahu (Photograph 7).

Wind erosion is also a factor; while at ‘Anakena onshore winds transport large quantities of sand onshore (Photograph 8), at the coast on Poike the devastation caused by wind erosion can be seen in Photograph 9. At Poike archaeological deposits have been almost wholly removed and the unique black basalt and white ahu stands proud of the ground surface. 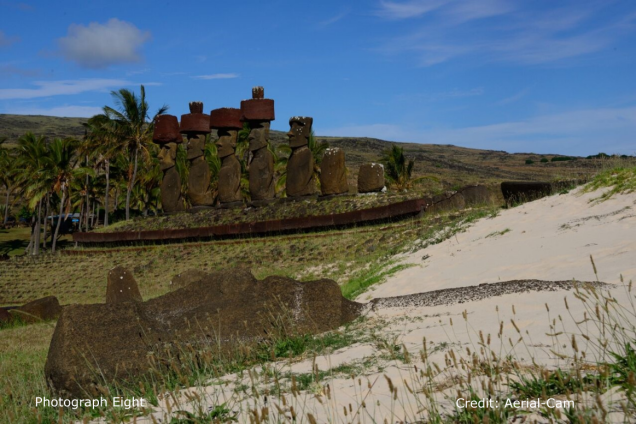 It is clear that climate change is having an adverse and worsening impact on sites situated on the coast. This damage will destroy parts of the archaeological resource including deposits that are particularly under-researched, but moreover could have a significant negative impact on the tourism economy of Rapa Nui.

The research was featured in a New York Times article and a podcast of an interview with Professor Jane Downes on Canadian CDC Radio is available for download.

Research visits to Rapa Nui undertaken as part of the Arts and Humanities Council (AHRC)–funded ‘Rapa Nui – Landscapes of Construction’ project have afforded the opportunity to generate these observations.