'Views in Orkney and on the North Eastern Coast of Scotland' by Countess Duchess of Sutherland (Elizabeth Leveson-Gower, 1765-1839)

Many people will be familiar with the significant part that the Countess Duchess of Sutherland, the Marchioness of Stafford, (Elizabeth Leveson-Gower, 1765-1839) had to play in the Highland Clearances. The facts surrounding the removal of thousands of men, women and children from their homes in the straths and glens of the Sutherland Estate to make way for more profitable sheep farms and associated agricultural improvements have been well explored by historians and writers.

It is not so widely known, however, that Leveson-Gower was also a visual artist of some skill. Views in Orkney and on the North Eastern Coast of Scotland, the focus of this article, contains 43 etchings based on a journey by sea made in 1805 from Dunrobin Castle (the ancient seat of the Sutherlands) to Orkney and includes 21 images of the islands. Though her work has been largely ignored in the standard historical accounts of Scottish art, her Views in Orkney were, according to Thomas Frognall Dibdin (1776-1847), ‘…executed with a spirit and correctness which would have done credit to the most successful disciple of Rembrandt.’[1] While this is likely an exaggeration it would be churlish to dismiss the artistic achievements of the Countess Duchess of Sutherland because of the infamy of her actions. On-the-spot depictions of Orkney from around this time are rare enough and art by women artists is rarer still, so is it quite remarkable that Views in Orkney was conceived and carried out at all.

Elizabeth Sutherland was one of the richest individuals of the age in the United Kingdom, inheriting the Sutherland Estate as a young child. She would later consolidate this wealth by marrying George Granville Leveson-Gower (1758-1833), reputedly the wealthiest man in England. As well as gaining control of vast amounts of land and property, in both Scotland and England, the couple also inherited the Bridgewater art collection, the greatest private holding of old master paintings in the world. Together they led lives of unparalleled affluence between their London town house (the Countess was a legendary socialite with royalty, writers, artists and the most important politicians of the day within her social circle), various stately homes in England and the enormous Sutherland Estate with its magnificent castle and grounds.

By the late eighteenth century the Highlands and Islands of Scotland were slowly opening up to visitors. Thomas Pennant’s tours of 1769 and 1772, as well as Boswell & Johnson’s famous excursion in 1773, both recorded and published later as travel journals, helped shape the public view of Scotland’s rugged and remote hinterland. Neither Pennant nor Boswell & Johnson got as far as Orkney, but other influential figures did, including the poet and novelist Sir Walter Scott (1771-1832) and the artist William Daniell (1769-1837).

Western Circle of the Stones of Stennis by Elizabeth Leveson-Gower

While Daniell, Scott and Leveson-Gower travelled to Orkney by independent means, the islands were soon to be opened-up further to visitors with the introduction of a regular steamer between mainland Scotland and Orkney in 1836 (the Scrabster to Stromness route was established twenty years later with the Paddle Steamer Royal Mail, built in Stromness, to serve the route) and the coming of the Highland Railway to Thurso in 1874. Reflecting on the new influx of wealthy visitors during the ninetieth century, the Orkney historian William P. L. Thomson (1933-2016) notes;

From a secure social position the landed classes viewed a picturesque landscape and its equally picturesque inhabitants, made fashionable by the Georgian and Victorian cult of the Highlands, and more particularly by Daniell’s landscapes, Vedder’s poetry and the popularity of Sir Walter Scott’s novel, The Pirate.[2]

Leveson-Gower’s outlook depicted in Views in Orkney chimed with Scott’s, who travelled to Orkney in 1814, in the company of the commissioners of the Northern Lighthouse Board. Writing in his journal Scott notes that ‘…we have all day been pleased with the romantic appearance of that island [Hoy]…it has a noble and picturesque effect in every point of view.’[3] To Scott, the drama of Hoy’s mountains and glens fitted with his ideas of the dignity of rural landscapes, and in his view it was the job of the poet or artist to translate this sentiment through words or pictures, writing;

…to be able to produce either in writing or by pencil an accurate resemblance of nature in its grander features…is a great gift. It is in fact the power of translating a chapter of the great book of nature for the benefit of those who will not or cannot read the original; sure it is strange to see that thousands enjoy the representation of scenes which had they witnessed them with their own eyes would neither have excited interest or pleasure.[4]

William Daniell’s own trip to Orkney in 1815 was carefully orchestrated by Scott, who provided a list of places for the artist to visit. The views that Scott had recommended to Daniell are remarkably similar to those chosen by Leveson-Gower ten years earlier – the hills of Hoy and the Dwarfie Stone, as well as the Standing Stones of Stenness, and in Kirkwall, St Magnus Cathedral and the Earl’s Palace – suggesting a common desire to represent the islands in a particular way. 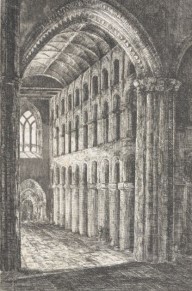 Inside Kirkwall Cathedral by Elizabeth Leveson-Gower

Indeed, it is clear from Views in Orkney that Leveson-Gower preferred to concentrate on the dramatic beauty of the islands and its ancient past – the ‘noble and picturesque’ aspects of the landscape and buildings that would be brought to a climax in Scott’s poetry and Daniell’s epic series of depictions around the coast of Great Britain. It is striking that the itinerary, which these early pioneers of modern tourism set on their respective tours of Orkney, has barely changed to this day.

While Views in Orkney may not be entirely topographically accurate, the prints have a genuine feeling of excitement and interest in the scenes unfolding before the eyes of the artist, expressing a feeling of drama and discovery.

This sense of romantic endeavour is aptly summed up in these lines quoted by Leveson-Gower, to accompany her print of the island of Stroma - off the northern coast of Caithness – the gateway to Orkney:

The northern Ocean in vast Whirls

Boils over the naked melancholy Isles

The extract comes from ‘The Seasons’, a long poem first published in 1730 by the Scottish writer James Thomson (1700-1748) which has been quoted often since – its particular sentiment used for varying purposes, in the opening pages of Jane Eyre, by Charlotte Brontë (1816-55) and by Hugh MacDiarmid (1892-1978) in his 1939 survey The Islands of Scotland, for instance.

The 21 images of Orkney chart a journey by sea through Scapa Flow to Stromness and the key points of interest on the Mainland. St Magnus Cathedral and Earl’s Palace are studied in some detail, both inside and out, and the Stones of Stenness are shown against a background of hills that are elevated and drawn more rugged for dramatic effect. When Leveson-Gower visited in 1805 the Odin Stone stood on the edge of Harray Loch. The famous holed monolith was later viewed by Walter Scott in August 1814, (and found its way into his novel The Pirate), but the stone was destroyed a few months later by an irate farmer who was annoyed with courting couples making their way over his land to the stone. Perhaps an early example of the natural interest of visitors leading to the destruction of the very thing they have come to revere?

The private publication of Views in Orkney and on the North Eastern Coast of Scotland must have been a costly labour of love – 120 copies were produced, from drawings by Leveson-Gower and text derived largely from Barry’s ‘Orkney’, for distribution to her friends and acquaintances – an impressive creative gesture.

The leisure time available to the Countess Duchess of Sutherland, which allowed scope to travel and pursue her art, was in stark contrast to the lives of the people she governed. While her friend Sir Walter Scott may have sympathised with the type of agricultural improvements that were being implemented by the Sutherland Estate - writing to the Duchess in 1811 that her tenants would one day ‘…look back with wonder at the prejudices of their fathers, and with gratitude to their mistress who pursued their welfare in spite of themselves’[5] - the upheavals of the early nineteenth century clearly had a huge impact on populations across the north of Scotland.

The ‘naked melancholy isles’ that the Duchess wished to portray offers a romantic ideal of an elemental and ancient landscape that highlights Leveson-Gower’s skill in using light and shade to create some of the most striking images of Orkney of the period, as well as becoming an important and complex historical document.

A copy of Views in Orkney and on the North Eastern Coast of Scotland can be referenced at the Orkney Library and Archive and is available to view online in the catalogue of the British Museum.