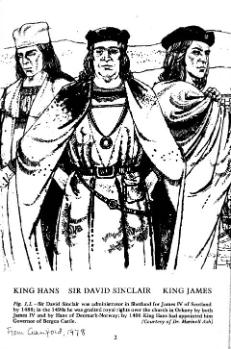 Following on from my recent discussion of some evidence for late medieval dress in Orkney (The Orcadian April 1st.2021), I thought that the list of clothes and other possessions of a member of the Sinclair family from the period after the pledging of Orkney and Shetland to Scotland in 1468-9 might be of interest. This list is included in the will of Sir David Sinclair of Sumburgh, illegitimate son of the last earl of Orkney, William Sinclair, and a very interesting member of this powerful family.[1] Despite the defects of his birth he did very well in the service of the king of Scots and of the king of Denmark-Norway and moved in the royal circles of both countries. He was appointed Governor of Bergen Castle with authority over a large administrative district in western Norway, and was in great favour with James IV who granted him offices and lands and military positions in north Scotland, as well as monetary gifts and pensions ‘for service given’. His service was so valued by King Hans of Denmark-Norway, that the king gave him a gold chain ‘which is callit a collar’ and which is mentioned in his will as one of his most treasured possessions.[i]

This will is an unusual survival from the period and gives us a remarkable picture of Sir David’s family and political relationships.[2] Important for the present discussion is the full description of the clothes which he possessed, and these are quite impressive.[3] They included luxurious garments, such as a doublet of cloth of gold and a doublet of ‘doune cramesse’[ii] which were bequeathed to his nephew, Sir William of Warsetter, along with three ostrich feathers. Also named are a ‘black gown of damask with silver buttons’; a ‘gray satin gown’; a ‘blue doublet with the bodice set with precious stones’; a ‘black doublet of velvet, red hose and short red cote of velvet without sleeves’ all of which were left to different individuals. The gown was an outer garment worn by both women and men over the doublet which was a close fitting male garment with round neck and fitted sleeves.[4]

Packs of green cloth and the ‘best piece of a linen robe’ are specified, as is one reference to the local woven woollen cloth, or ‘wadmel’ (ON vaðmal), two packs of which were bequeathed to a woman called ‘Sigrid in Rorik’.[iii] Another woman, called Gertrude, was more favoured as she was left Sir David’s great silver belt and a piece of cloth of gold ‘the length of a Flanders ell’. Twelve ells of black ‘yper’ (Ypres) cloth were left to his chaplain and secretary, Dr. John Eke, a canon of Uppsala, along with two coins (rose nobles), a saddle ‘with attachments’ and a short black velvet coat. Other velvet coats were left to churches in Orkney and Shetland, probably for adaptation as liturgical vestments: two thirds of a black velvet coat were left to St. Magnus Church in Tingwall, where Sir David wished to be buried, and where the will was drawn up on 10 July 1506, while the third part of the same velvet coat was left to the Cross Kirk in Dunrossness.[iv] A red velvet coat was left to the high altar of the cathedral kirk of Orkney (St. Magnus’). It was part of his possessions in Easter Ross which were left to James Sinclair, who had succeeded him as ‘captain for the tyme’ in Dingwall (possibly one of his sons), and must have resulted from his tenure of the office of chamberlain of the earldom of Ross and the lordship of Ardmannach. These possessions in Easter Ross are enumerated and consisted of ‘harness, gouneis, keithtin, gold, silver, bestis, corne, and generally ‘al that evir I have thare’ (except the red velvet coat). This substantial amount of ‘geir’ will not have included the chalice of the church of St. Magnus in Tingwall, which is said to be in Dingwall, and which he commanded ‘to be deliverit’, presumably back to Shetland.[v]

There are a few references to items of value, in particular to three sets of silver ‘stoups’ (tankards or drinking cups) which had a series of smaller stoups which fitted inside. He had three sets and they were left to his nephew, Lord Henry Sinclair (‘the best silver stoup with twelve stoups included’ ),to Henry’s wife Lady Sinclair (‘my myd steope of silver with twelve stoppis (stoups) inclusit in the samen’) and to their son and heir ‘my best silver stope wyth sex stoppis inclusit in the samen’.

There is much we would like to know about Sir David’s private life, but the problems over his illegitimacy mean that it is somewhat obscure. He never obtained letters of legitimation, which meant that the land which he bequeathed to his children escheated to the Scottish crown. Nor did he contract a formal marriage so that his own children would be legitimate; the references to women who were the recipients of minor bequests (Gertrude, Ingarth, and Sigrid) provide no indication that they were of any great significance in his life, although they may have been the mothers of his children. There were certainly sons, to whom he left 100 marks of land each, and daughters, who received 50 marks.[vi] The Magnus Sinclair who was left a blue doublet with the bodice set with precious stones, and a hood set with precious stones, (and the golden chain ‘the quhilk I wear daily’) was most probably his (eldest?) son.[vii]

The evidence of material wealth in Sir David’s will gives us a vivid impression of the standard of living which could be attained by members of the earldom dynasty, who also benefited from the rewards of service at the Scottish and Danish royal courts. Sir David’s main base was at Sumburgh in the very south of Shetland, but he also had lands in Orkney, and ‘innes’ in Kirkwall, as well as ‘innes’ in Edinburgh, which he left to his brother William, earl of Caithness. Despite being illegitimate he appears to have been on good terms with his half brothers and sisters from the evidence of a charter by which all his thirteen half brothers and sisters, children of Earl William Sinclair, granted to him their lands of Sumburgh (Swinburgh) and all their other lands in Shetland.[5] They say that this is done ‘for the fraternal love and affection which we have and bear to our said brother’ and for ‘other gratitudes rendered to us by him’, which suggests that they may have received payments in return. As a result of this family arrangement, as well as other purchases of land in Orkney and Shetland Sir David became a wealthy landowner in the Northern Isles. In conjunction with his commercial activity and his political career he had plenty of wealth to spend on the purchase of some magnificent clothes. But there is little evidence that he had religious scruples or that he bestowed charitable donations in preparation for the day of reckoning. The only entries sounding a personal note are the references to the ‘puir folk’ that came out of Orkney with him, to whom he left their own land or else the equivalent in goods.[6] Who were these ‘poor’ Orcadians and where did they go to with Sir David? These are among the many questions we cannot answer despite learning so much about his clothes from this remarkable survival of his will, a rare treasure trove of information about Orkney and Shetland in the post impignoration era.

[1] For a full discussion of his career see Crawford, ‘Sir David Sinclair of Sumburgh’, 1-12

[i] This item is a symbol of the high esteem in which Sir David was held by King Hans and may have been bestowed on him when he was knighted by the king. He left it to ‘St George’s altar in Rosskyill’ (Roskilde in Denmark, the royal estate and political centre).

[ii] Cloth of gold’ denotes a textile woven with gold or silver thread (Encyclopedia, 132) probably imported from Byzantium, Spain, Italy or the Mongol Empire (ibid. 133): ‘doune cramesse’suggests a dun-coloured cloth called cramesse which is the origin of the word for ‘crimson’ (cramoisé in Anglo-French). See the on-line Lexis of Cloth and Clothing Project (University of Manchester), under ‘crimson’.

[iii] Wadmel was a coarse woolen cloth which was a valuable export produced in all the North Atlantic islands (Crawford and Ballin Smith, The Biggins, 201).

[iv] This church was at Quendale in the southernmost part of Shetland and close by the site of Sir David’s seat at Sumburgh.

[v] This may have been made, or repaired, at some silver workshop in Dingwall

[vi] The daughters thus received half of the amount of land left to the sons, in accordance with ‘odal’ practice.

[vii] This golden chain was clearly different from the golden chain already mentioned which had been given to him by King Hans and which he left to St. Georges altar in Roskilde cathedral (see above). The author hopes to examine this livery collar and its significance in further detail.

The Lexis of Cloth and Clothing Project (University of Manchester)