I am broadly interested in interdisciplinary and comparative approaches to researching and teaching the medieval northern European world.

My primary research considers issues of law, normativity, and transgression in Viking and Medieval Scandinavian societies. 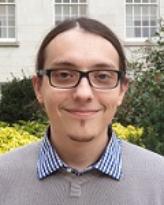