Survey of the Ara Metua, Rarotonga 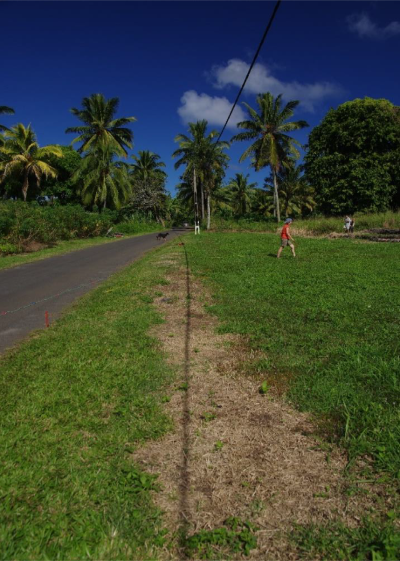 Rarotonga is the largest of the Southern Cook Islands, which are located within central eastern Polynesia. The date of its initial colonization is far from clear. From oral accounts and genealogical sequences a date of around 1250 AD has been postulated (e.g. Campbell 2002, 148) for the earliest settlement by Polynesians arriving from Tahiti and Samoa.

More recently, the settlement of the Cook Islands has been suggested to have been after the Polynesian expansion into the ‘core’ areas of Easter Polynesia (e.g. Society Islands), which seems to occur c. 900 AD. However, given the limited archaeological research conducted on Rarotonga, especially a lack of a clear radiocarbon chronology for settlement, the date of colonization and subsequent social development remains obscure.

Although characterised as a ‘typical high island’ (Campbell 2006, 103), the topography of Rarotonga is unusual in having a continuous low coastal belt encircling central highlands. It is around this coastal zone that one of the largest ‘monuments’ in Polynesia was constructed: the great road of Toi (Te ara nui o toi). This road, also known as the Ara Metua (parent road), was described by Hiroa (1927, 211) as encircling the entire island. Actually, prehistoric encircling roads are present in other Eastern Polynesian contexts, for instance, the Ala Loa is known to have run around the coastline of the Big Island, Hawai’i, and its ritual circuit was a feature of the Makahiki ceremony (Mills 2002, 150). Traces of a coastal circuit road have been discovered in the Phoenix Islands, and Routledge (1919) describes a coastal circuit ara for Rapa Nui (Easter Island). However, what serves to make the Ara Metua on Rarotonga outstanding among Polynesian roads is the nature and scale of construction.

Campbell (2006) has described the layered character of the Ara Metua and how it not only served a primary ritual or cosmological role, as suggested by Parker (1974, 64), but also acted as a day to day means of movement, structuring and ordering the location of adjacent buildings, including marae, dwellings, paepae, koutu, and so forth. In short, as a monumental circuit road, the Ara Metua provided a degree of order to peoples place in the world, and the manner in which they encountered other people and places.

Despite warnings that the Ara Metua can be ‘over-analysed’ (Campbell 2001, 210), there remains substantial gaps in our knowledge regarding its morphology and construction sequence, for example, was it built in a uniform manner or did it vary in different sections, and did it exist as a complete circuit? Questions of chronology and sequence are equally important, for instance, when was it built, and was it of unitary construction or composed of piecemeal ‘projects’ with sections being added through time? Also, we know nothing about how frequently (if at all) was it rebuilt, resurfaced or refurbished in one way or another. These structural questions translate into social questions as in being a monument, did the appearance of the Ara Metua, in terms of grandeur and the quality of materials, express differences in the social standing of different vaka on the island?

In order to address these questions a sustained programme of research on Rarotonga is required to investigate the composition and chronology of the ara metua, and associated structures. The report represents the preliminary results from the first season of research.