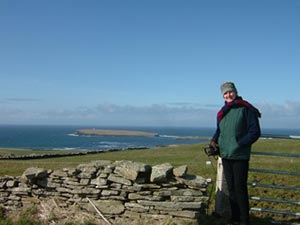 Prof Crawford is also Honorary Reader in History at the University of St. Andrews having spent over thirty years as a teacher in the Department of Mediaeval History. Since taking early retirement in 2001 she has continued to pursue her researches into the history and archaeology of the Scandinavian settlements in Scotland, and contacts across the North Sea in the Middle Ages.

Recently completed research projects include
i) The place-names of the Norse-Celtic frontier zone in Northern Scotland (2003)
ii) The ‘papar’ project (2009)
iii) The cult of St. Clement in England and Scotland and Scandinavia (2008)
iv) The partial reconstruction of the medieval log-timbered ‘stofa’ (2007-8) which was excavated on the island of Papa Stour, Shetland (1977-90)

Prof Crawford's doctoral research was a study of the history of the earls of Orkney-Caithness and their relationships with the kings of Norway and Scotland from the late Norse period until the pledging of the islands to Scotland in 1468. She developed a keen interest in archaeology as part of an inter-disciplinary approach to Norse studies, and has excavated the site of a royal Norwegian farm on the island of Papa Stour in Shetland. The report of that excavation The History and Excavation of a Royal Norwegian Farm at the Biggings, Papa Stour, Shetland was published in 1999 jointly by the Norwegian Academy of Science and Letters and the Society of Antiquaries of Scotland. Prof Crawford has also edited a volume of Conference papers Papa Stour and 1299 (The Shetland Times 2002) resulted from a conference commemorating the 700th Anniversary of Shetland’s first document and the completion of the Papa Stour excavations. This brings together papers by Scandinavian, Scottish and Polish historians and archaeologists which were also published in Norway as a volume of the academic journal Collegium Medievale (2002. vol. 15).

‘The Saint Clement dedications at Clementhorpe and Pontefract Castle: Anglo-Scandinavian or Norman?’ in Myth, Rulership and Charters (Ashgate 2008): 189-210

‘Houseby, Harray and Knarston in the West Mainland of Orkney. Toponymic indicators of Administrative Authority?’ in Names Through the looking-Glass. Festschrift in Honour of Gillian Fellows-Jensen, ed. P.Gammeltoft and B.Jørgensen, (Copenhagen 2006): 21-44

‘Thorfinn, Christianity and Birsay: what the saga tells us and archaeology reveals’ in The World of Orkneyinga Saga, ed. O.Owen (Kirkwall 2005): 88-110

‘The Sinclairs in the Late Middle Ages’ in Lordship and Architecture in Medieval and Renaissance Scotland ed. G.Stell and R.Oram, (RCAHMS 2005): 189-204

The Govan Hogbacks and the Multi-Cultural Society of Tenth-century Scotland (No. 3 in Old Govan Lecture Series 2005)