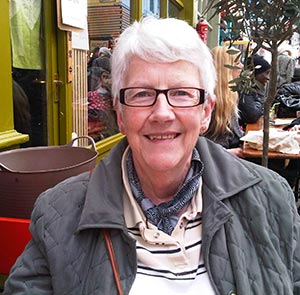 As a Shetlander, Dr Waugh felt as if she was returning to her roots when she was offered an Honorary Research Fellowship at the Centre for Nordic Studies and was delighted to accept. Dr Waugh is also Honorary Fellow in Celtic and Scottish Studies, School of Literatures, Languages and Cultures, University of Edinburgh and is based there in the Scottish Place-Name Survey. Her publications have focused on the place-names of the Northern Isles and Caithness and, in recent years, particularly Shetland where she lives for part of the year.

Since moving back to Shetland in 2005, Dr Waugh has become involved in the work of the dialect group Shetland ForWirds and has worked with their ‘Wird Group’ on the production of a small booklet on the Shetland dialect, entitled Mirds o Wirds 'large numbers of (Shetland dialect) words'. This has been great fun and has added a research dimension which Dr Waugh is keen to explore further. Her insider knowledge of the Shetland dialect has, of course, been very useful in her study of the place-names of the Northern Isles. She has organised several conferences covering aspects of the language and history of Shetland and Orkney.

Dr Waugh greatly enjoyed leading the small group of members of the Scottish Place-Name Society committee which worked with Professor W. F. H. Nicolaisen to produce a volume of his selected essays and would like to draw attention to the book, published by the Scottish Place-Name Society in 2011: In the Beginning was the Name: Selected Essays by Professor W.F.H. Nicolaisen. Dr Waugh’s own understanding of place- and personal names has been widened by reading the work of Bill Nicolaisen.

In the Beginning was the Name : Selected Essays by Professor W.F.H. Nicolaisen (The Scottish Place Name Society, 2011)

‘Drongs, hjogelbens, pobis and skoreks: Jakobsen recorded them all’. In: T. Sigurðardóttir and B. Smith (eds.), Jakob Jakobsen in Shetland and the Faroes, 14-34 (2010).