High Life Highland and the University of the Highlands and Islands have agreed a corporate partnership to provide discounted individual leisure membership for students and staff of the University.

The discounted membership is also available at Inverness Leisure.

The corporate partnership allows students and staff of the university (including academic partners) to gain 10% discount off High Life memberships. The discount applies to both Direct Debit and Annual payments.

Students based at Perth College UHI have access to excellent facilities at the Academy of Sport and Wellbeing, which offers discounts on membership, fitness classes and personal training for all students registered with Perth College UHI. Find full details here.

Students based at Inverness College UHI and Moray College UHI can also get a discount to the gym facilities at their campuses. Contact your local HISA team here for more details. 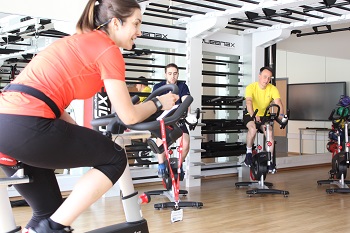 The students' association, HISA, has a range of clubs and societies for you to join. Some of the sports clubs available include:

HISA has a number of clubs covering activities from Sailing to Snowsports. Find a full list of current clubs, and how to set up your own here.

Want to find out how to get more active or to volunteer with sports opportunities? There are opportunities out there no matter where you’re based or what your interests are! Find out more here.

HISA now produce a Sport and Wellbeing newsletter each month. This contains information about events, activities, clubs and societies and all things sport and wellbeing. You can see all the issues of the newsletter here.

Do you have a story or event you’d like to promote in the HISA newsletter? Email HISA’s Sports Development Coordinator, Laurie Symon, here.

Sporting Blues have been used in universities to recognise sporting excellence since the 1800s. The university Sporting Blues awards scheme was launched in March 2017 and recognises the sporting achievements of our students.

The awards scheme, which is a joint initiative between the university and the Highlands and Islands Students’ Association was proven to be very successful in gaining candidates in its first year with the blues being awarded at graduations to seven winners.

We would like to urge students and staff to nominate outstanding students as well as influencing students to either nominate themselves or fellow athletes.

Please take a moment to read the sporting blues criteria.

What are the Sporting Blues?

A Full Blue is awarded to athletes of outstanding ability judged by standards applicable to students’ different sports.

Half Blues are awarded to athletes for playing well above the average standard for a University 1st team (where applicable) or represent the University as an individual in national level competition.

To receive a Colour, athletes, where applicable, need to serve and play for their club and to be regular 1st team members, representing the team in at least 65% of the eligible matches, recording at least one victory.

Sports Person of the Year

This is an award for truly exceptional athletes, the panel will decide annually whether to award it, with the decision following the same criteria as that for a Full Blue.

Who is this open to?

The Sporting Blues are open to:

To submit a nomation please use this form for sporting blues, and this alternative form for honorary blues nominations.

Scottish Student Sport(SSS) and British Universities and Colleges Sport(BUCS) have regular competitions which are open to all UHI students. You can find full details of their competitions at the following pages:

If you would like to represent UHI in competition, HISA may be able to provide some funding for you. You can find full details of the funding available here.

The university, in conjunction with the colleges and HISA, has an ambitious plan to increase the reach of service provision to help more students and staff be active more regularly and reach their potential through sport and physical activity.

This builds upon the excellent progress already made in encouraging and providing activities and opportunities that aim to inspire all students, staff and local communities.

The Sport and Physical Activity steering group will be responsible for overseeing the implementation of the strategy, as well as periodically evaluating and reporting on progress.  It will focus on providing leadership, advice and support to relevant people across the university to enable the advancement of the strategy and of sport and physical activity at the University of the Highlands and Islands.

Our student Sport Strategy may be downloaded and read here.