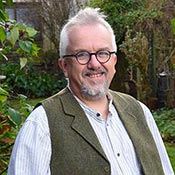 I am a historian by training but a historical geographer by inclination. Consequently, almost everything I do has landscape(s) either at or close to its heart; with a particular focus on the twentieth-century Highlands and Islands. I joined the Centre for History in September 2015, having previously been with the University of Gloucestershire for a considerable period of time. I completed my PhD at Bristol University, where I researched the historical geography of acts of social protest in the Highlands between the two World Wars.

I have strong links with Curtin University, Western Australia, and have held two Research fellowships there, in 2008 and 2014.

My most recent book, Landscapes of Protest in the Scottish Highlands after 1914, was shortlisted for the research book of the year in the Saltire Awards 2014.

Over the last few years I have developed two, interconnected, principal areas of research. One set of interests lies in the field of heritage studies and with the very recent upsurge in critical thinking around the ways the past is put to use in the present. My focus here is on the development of the concept of ‘heritage from below’ and the contested meanings of heritage as made evident in acts of memorialisation.

Linked to this is my interest in the social and cultural history of local community and landscape change with a particular emphasis on historical and cultural processes shaping the landscape of nineteenth and early twentieth-century Highland Scotland. The focus of this research is on popular protest and the sense of place, personal and local identity made manifest in the oral tradition of particular places and events.

Out of this has arisen an interest in the nature/culture dualism. Here my efforts focus on the ways in which the croft and crofters may be said to have been shaped by a set of vernacular environmental ethics.

Landscapes of Protest in the Scottish Highlands after 1914: the later Highland Land Wars, (London: Ashgate, 2013).

‘Memory, heritage and the micropolitics of memorialisation: commemorating the heroes of the land struggle’, in E. Cameron ed. Recovering From the Clearances, (Kershader, Isle of Lewis: The Islands Book Trust, 2013).

‘Memory, Identity and the Memorialisation of Conflict in the Scottish Highlands’, (with T. Hall), in N. Moore and Y. Whelan eds. Heritage, Memory and the Politics of Space: new perspectives on the cultural landscape, London: Ashgate Publishing, 2006.

‘;Their families had gone back in time hundreds of years at the same place’: attitudes to land and landscape in the Scottish Highlands after 1918", in D. Harvey et al. (eds.) Celtic Geographies, London: Routledge, 2001

‘Land, landscape and heritage from below in the Scottish Highlands’, accepted by Landscape History (to be published 2016)

‘Non-contested land occupations in the Scottish Highlands after 1918’, accepted by Journal of Historical Geography (to be published 2016).

“A Glorious Time?” Some reflections on flooding in the Somerset Levels, (with L. McEwen and O. Jones), Geographical Journal, 2014.

Over the coming years I will be developing a number of modules based on my specialist interests. I currently teach at both undergraduate and masters levels.

Recognising the Centre’s strong focus on community and public engagement, I am keen to build on my existing links with community organisations in the Outer Hebrides. I also intend to develop links with local arts organisations, along the lines of those I have with groups such as Walking the Land.

I am membership secretary for the Historical Geography Research Group at the Institute of British Geographers.