Dr Rachel Meredith Davis is a Teaching Assistant at the University of the Highlands and Islands.

Dr Davis received her BA in History with a concentration in ancient/medieval history and an interdisciplinary minor in medieval and early modern studies from the University of North Carolina in 2012. She completed her MSc in Medieval History at the University of Edinburgh in 2014. She remained at the University of Edinburgh for her PhD, which she completed in 2020. Her thesis, titled 'Elite Women and Power in Late Medieval Scotland, 1296-1458', explored the ways in which women’s identities were constructed in their seals and charters and how women used these identities to access power and resources in the fourteenth and fifteenth centuries.

Dr Davis's research interests broadly include gender, agency, and material culture in fourteenth- and fifteenth-century Scotland. She was Runner Up for the Women's History Scotland 2020 Leah Leneman Prize for her essay 'Lock Her Up! Elite Women, Treason, and Imprisonment in Late Medieval Scotland'. She has a forthcoming journal article with the Proceedings of the Society of Antiquaries of Scotland titled 'Material evidence? Re-approaching elite women's seals and charters in late medieval Scotland', which will be out in November 2021. She is currently working on scholarly commentaries on illustrative plates of Scottish seals in volume three of Vetusta Monumenta as part of the digital edition of the text, a project led by Noah Heringman at the University of Missouri in collaboration with the Society of Antiquaries of London. 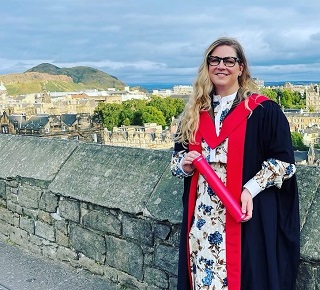