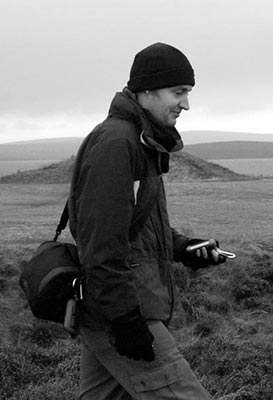 After graduating from the University of Southampton with a BA Honours degree in Archaeology, James worked as a field archaeologist and geophysical surveyor on a range of developer-funded and research projects in Britain, Italy and Spain. He moved to Orkney in 2004 initially as an archaeological geophysicist and took on his present role in 2006. James completed his PhD in ‘Landscape and Society in Orkney during the First Millennium BC’ at the University of the Highlands & Islands in 2014.

James' main research interests are in landscape archaeology, geophysical and field survey, and later British Prehistory, principally in Atlantic Scotland. He is particularly interested in the integration of traditional survey techniques, phenomenological and experiential approaches, and artistic practice in recording, interpreting and presenting archaeological landscapes.

James is also the Exams Officer for the University of the Highlands and Islands Archaeology Institute.