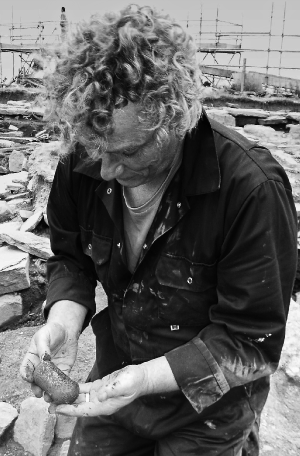 Mark Edmonds is Emeritus Professor of Archaeology at the University of York, where he held the Second Anniversary Chair in Archaeology (2006-2015).

He is an internationally respected and highly influential prehistorian and the author of more than 20 books and dozens of articles, among them Ancestral Geographies; The Langdales, and Orcadia.  An abiding interest in arts-based approaches to the interpretation of archaeological material has led Mark to experiment with poetry, print-making, music and sound collage across a number of projects, including The Beauty Things (with Alan Garner), Stonework (with Rose Ferraby) and Refugium (with Ben Elliot & Jon Hughes).

Prior to his time at York, Mark’s academic career included posts at Cambridge (1989-93) and Sheffield (1993-2004). While at the University of Sheffield, he developed an MA in Landscape Archaeology, a course he led for a decade, which has had a wide and lasting influence on landscape-based research and teaching. Here in Orkney, Mark has an on-going involvement in work at the Ness of Brodgar. He was also the director of Working Stone; Making Communities, a three-year project, funded by the Leverhulme Trust, exploring the biographies of stone tools found in Orkney over the past two centuries (http://www.orkneystonetools.org.uk/). He is also the co-founder of West Side Cinema in Stromness.