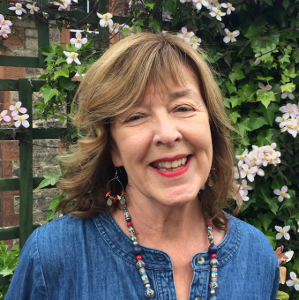 Olwyn is a well-known scholar on Scandinavian Scotland, especially the Northern Isles. She is a prolific author and editor and has published extensively on a wide range of topics, for both academic and popular audiences.

Her varied international work includes helping pioneer the Council of Europe’s Cultural Viking Routes project in the early 1990s, when she also represented the Council itself on a mission to Belarus; and she was Scotland’s representative on the Viking Congress for many years, among many other international engagements. She has made several acclaimed TV appearances, including Time Team (in Sanday) and Blood of the Vikings. She is an accomplished speaker and lectures widely, mainly on Scandinavian Scotland and the archaeology of towns. She is a Member of the Institute for Archaeologists, a Fellow of the Society of Antiquaries of Scotland, and a Trustee of Archaeology Scotland.

Olwyn began her archaeological career on the Brough of Birsay in 1976, where she discovered Orkney and Vikings – two passions that have shaped her professional life. Olwyn excavated in Orkney and Shetland over many years, directing major projects at Tuquoy, Westray, and Kebister, Shetland, as well as excavating widely elsewhere in Scotland, England and Norway.

A graduate of Durham University, Olwyn’s MA thesis was on late Viking art. In her early career, she won two international scholarships and spent 6 months in Sweden researching Viking art and a year in Norway studying Viking silver and economy. In 1986 she joined the (then) Central Excavation Unit in Edinburgh as Senior Field Officer and directed projects, notably on the major hillfort on Eildon Hill North (Scottish Borders), as well as managing projects run by the unit all over Scotland. In 1991, she was instrumental in helping ensure that the famous Scar Viking boat burial was rescued from winter storms.

In 1992 Olwyn joined Historic Scotland as an Inspector of Ancient Monuments, at first helping to manage the Archaeology Programme, but over the next 23 years taking on a wide variety of heritage management roles. For a decade she was responsible for the archaeology of towns and cities, a neglected policy area that was transformed under her leadership, and is still one of her research interests. She also spent 3 years with the Historic Environment Advisory Council, which advised Scottish Ministers on a range of heritage challenges. In 2009, she returned to Historic Scotland as Head of the Scheduling, Marine and Battlefields team.

Olwyn retired from Historic Scotland in 2015 and now works as an archaeological and heritage consultant, mainly writing up her excavations at Tuquoy and editing other archaeological reports. She is also active in her local community and is a Director of North Berwick Trust and of North Berwick Environment and Heritage Trust, and she chairs a local group working to consolidate a scheduled ruined kirk.

In Press: ‘A decorative mount from the Brough of Birsay, Orkney’, in Morris, C D (ed), The Birsay Bay Project 3.

Shetland and the Viking World: Papers from the Proceedings of the Seventeenth Viking Congress, Lerwick (eds Turner, V E, Owen, O A and Waugh, D J).

Things in the Viking World. Lerwick (edited by O Owen). (part of the EU-funded THING Project)

‘Norse influence at Govan on the Firth of Clyde, Scotland’, in Sigmundsson, S (ed), Viking Settlements and Viking Society, 333-46 (= Proceedings of the 16th Viking Congress, Iceland) (with Stephen Driscoll).

‘History, archaeology and Orkneyinga saga: the case of Tuquoy’, in Owen, O (ed) The World of Orkneyinga Saga – ‘The Viking Broad-cloth Trip’, 192-212.

‘Scotland’s Viking towns: a contradiction in terms?’, in Mortensen, A & Arge, S V (eds), Viking and Norse in the North Atlantic, 297-306 (= Proceedings of the 14th Viking Congress, Faroe Islands).

‘The Scar boat burial - and the missing decades of the early Viking Age in Orkney and Shetland’, in Adams, J & Holman, K (eds), Scandinavia and Europe 800-1350, Contact, Conflict and Coexistence, 3-33 (= Medieval Texts and Cultures of Northern Europe, 4, Brepols).

‘Wrecks and the diving public: the case of Scapa Flow’, The Archaeologist (IFA).

‘The strange beast that is the English Urnes Style’, in Graham-Campbell, J, Hall, R, Jesch, J and Parsons, D N (eds), Vikings and the Danelaw, 203-22 (= Proceedings of the 13th Viking Congress, Oxbow).

The Future of the Scottish Burgh Survey (= Historic Scotland Research Report; with A MacSween and M Ritchie).

The Sea Road: a Viking voyage through Scotland (= The Making of Scotland series, Canongate).

‘The Scandinavian comb’, in ‘The discovery of medieval deposits beneath the Earl’s Palace, Kirkwall, Orkney’ by E McB Cox, O Owen and D Pringle, Proceedings of the Society of Antiquaries of Scotland, 128, 567-80.

‘A lone traveller’s end? A group of early historic artefacts from Carronbridge, Dumfries and Galloway’, Proceedings of the Society of Antiquaries of Scotland, 125, 753-70 (with R D Welander).

‘Historic Scotland’s Backlog Project and the Projects Database’, Proceedings of the Society of Antiquaries of Scotland, 125, 1-8 (with G J Barclay).

‘The Catalogue’ in J Graham-Campbell et al The Viking-Age gold and silver of Scotland, National Museums of Scotland monograph (1995), 89-167 and passim.

‘The penannular brooch’, in Johnston D J ‘Carronbridge, Dumfries and Galloway: the excavation of Bronze Age cremations, Iron Age settlements and a Roman camp’, Proceedings of the Society of Antiquaries of Scotland, 124, 267-8.

‘Scar, Sanday, Orkney: the rescue of a Viking boat burial’, in Ambrosiani, B and Clark, H (eds), Proceedings of the Twelfth Viking Congress, 159-172 (with M Dalland).

‘Kebister, Shetland: An armorial stone and an archdeacon’s teind barn?’, Post-Medieval Archaeology, 22, 1-20 (with B Smith).

‘Excavations and survey work on a multi-period settlement site at Kebister, Shetland 1985’, Universities of Durham and Newcastle Archaeological Reports for 1985, 9, 46-52.

‘A decorative mount from the Brough of Birsay, Orkney’, Universities of Durham and Newcastle Archaeological Reports for 1983, 7, 55-60 (with C D Morris and J M Cronyn).

‘The rescue project at Tuquoy, Westray, Orkney Islands, 1982’, Universities of Durham and Newcastle Archaeological Reports for 1982, 6, 45-50.

MA Thesis (University of Durham) Late Viking Art: a catalogue and re-evaluation of the Urnes Style in England (awarded 1980).

(excluding HS and HEACS policy documents and numerous contributions to Discovery and Excavation in Scotland, etc.)

‘Lairg and the impact of bracken in archaeological areas’ (Historic Scotland 1992).

‘The excavation of a post-medieval building at Halfway House, by Kirkcowan, Wigtown, Dumfries and Galloway’ (AOC Annual Report 1989).

‘Report on the archaeological watching brief undertaken during the stabilisation programme of the Links of Noltland, Westray, Orkney’ (SDD-CEU internal report 1986)

‘An interim report on the second season of the archaeological rescue project at Tuquoy, Westray, Orkney, 1983’ (University of Durham internal report)