Joshua Smith is the 2017/18 HISA Depute President for Lews Castle College UHI. Joshua has been a Class Rep for the past two years, firstly for the NQ Multimedia course and then for HNC Administration and Information Technology. Joshua won the sparqs Student Engagement Award 2017 for Best Class Rep. 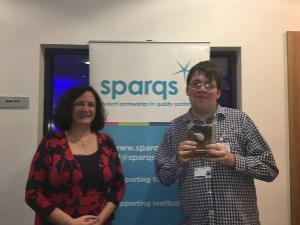 “It was the students who attracted me to the Class Rep role during my first year.  I had noticed that some things within my campus at Lews Castle College UHI needed improving and I put it upon myself to try and help to improve things for the other students.  As for the second year of being a Class Rep, I would say that it was my love for being a Class Rep in the first year, and being involved with HISA, that attracted me to continue in the role.  Never in my educational life have I been so involved in helping to improve the student experience of current and future students.

One of the benefits of being a Class Rep, and it is a bit of a major one, is that I am no longer shy within college.  My first year at college, as well as the two years prior to that in The Nicolson Institute, I was very shy.  This was because I had only recently moved to the Isle of Lewis and didn't know a single person in the high school, which was very difficult for me.  I am guessing becoming a Class Rep, and being part of HISA now, has made me feel part of a big family, which we are!  Another benefit is what I have gotten out of networking with other students.  Over the last year, I have made so many new friends who I always talk to on social media because I am so interested to hear what they are up to in their students’ association.

The one thing that I enjoyed most about being a Class Rep was talking to the other students about what they think we should try to improve within the college. Sometimes they would suggest something like ‘improve Blackboard because it's too slow’ and I would then take that feedback to the Depute President at the time who could report it to HISA at the regional level.  Another thing I enjoyed was going to different conferences, where I met students from other UHI colleges and got the opportunity to hear about what it is like at their campus, what could be improved and what was demonstrated as a problem at those campuses.

To encourage other students to become a Class Rep I would tell them to take every opportunity they get.  I would advise them to speak to the lecturers and students at their campus to find out what their concerns or praises are.  Also, becoming a Class Rep and getting the training from sparqs looks really good on your CV, so it's well worth doing!

Being a Class Rep has given me a voice to be able to change things in the college.  I would say that the Class Rep role inspired me to nominate myself for HISA Depute President.  I thought that after two years of being a Class Rep and of course then winning the Best Class Rep from the whole of Scotland it would have been silly of me not to follow the path of HISA and nominate myself for Depute President.  My aims for this year as Depute President for Lews Castle College are to improve the Class Rep system, continue to build-up the Adventure Club and even to just try and make sure that the word HISA means something to the lecturers and students in the Western Isles.

When I found out that I had won the sparqs Student Engagement Award for Best Class Rep I was very surprised and emotional, but those feelings didn’t set in until after I had received the award.  When they were reading out the names of the nominations, I never thought that it would be me who would win. But when they read out my name I stood up straight away.  Perhaps because I just wanted to get it over with or most likely because I was just so excited to receive such an amazing award.”

Find out more about becoming a Class Rep