Stephanie Sinclair from Shetland is a current distance-learning student on the BSc Sustainable Development degree. Stephanie was involved in volunteering with a local peer education network. 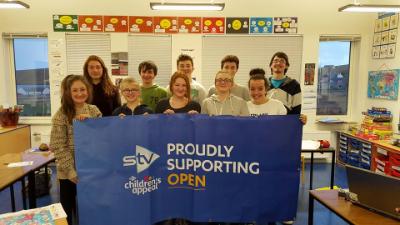 “The group I volunteered with is called OPEN (Our Peer Education Network).  The group met every Tuesday evening, where we designed and developed workshops and did issue-based training in preparation to deliver the workshops at local schools and youth clubs around Shetland.

The group would cover issues such as sexual health and relationships, online safety, drugs and alcohol, mental health, gender, self-harm and body image.  The idea behind the group is that young people often find it easier to connect and be honest and open with someone their own age.  For example, many first year school pupils do not want to talk about sexual health with a teacher they see every day, but are often more comfortable speaking with someone closer to their own age.  We found that the pupils were much more relaxed when speaking to our group and the pupils felt they learned better too.

We also had many opportunities to do additional training outside of the group, for example, I was involved with a huge WhoCares? Scotland event, where there was the chance to do various training courses, such as Child Exploitation and Online Protection (CEOP) training, SHARE training, as well as a few sign-language lessons.  If there was ever anything we wanted to learn, Una, our co-ordinator would set it up for us.

Through my attendance at our group meetings and delivering the workshops, I quickly built up over 200 volunteering hours and was able to count these hours towards achieving Saltire Awards. Being part of the group was so personally rewarding that I hardly noticed the time building up.  Delivering workshops to classes of students showed me that I am more confident than I think I am.

As well as the experience, all of the training, and the Saltire Awards have given me an edge in finding employment.  I recently took up a relief youth worker job which would never have been possible without those certificates.

I have gained a range of valuable skills from volunteering with OPEN.  For example, my communication skills are better than ever, I have learned both to lead and to work as part of a diverse group of various ages and backgrounds, and I have certainly learned to keep myself organised as I was juggling three jobs and a college course at the same time.

The most enjoyable part of the volunteering experience for me, were the Tuesday night meetings where we'd all get together with some tea and biscuits to discuss the workshops already delivered and how we could improve them, and just generally to catch up.  My fellow volunteers and I all became very good friends and supported each other both inside and outside of volunteering.”

Find out more about the Saltire Awards