Scott Anderson is a current HND Administration and IT student at Argyll College UHI. Scott won the 2015/16 HISA Award for Best Class Rep and is now a HISA Depute President. 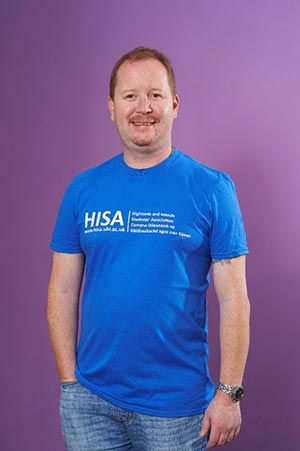 “I was encouraged to volunteer as the Class Rep by my classmates and agreed to the opportunity as I wasn’t prepared to go through the year without there being a student voice on the course team.

However, what I learnt was that the practical experience that directly related to my course was invaluable and will prove to continue to be during my time as HISA Depute.  The role gave me confidence in my practical abilities as well as consolidating what I had been studying.

As a Class Rep I enjoyed the respect given to me by the other members of the course team and the gratitude shown by my classmates for the amount of effort that they saw me putting into their education.  We had quite a few issues come up that, if not addressed properly, could have resulted in some students not passing.  I am proud of the support that I was able get for some students that may have fallen by the wayside as a result of some of these issues.

I would encourage other students to take on Class Rep roles. As students we need a voice, and no Class Rep equals no student voice for the class.  As a Class Rep, you get training and experience that will make your CV stand out compared to your peers because you were the one that said ‘I will do it’ or because your classmates felt that you were the one for the job.

Being a Class Rep in my HNC year inspired me to put myself forward for the role of HISA Depute for Argyll College. I would really like to see more engagement between the college and the student body, and if I only leave one legacy, it will be too see a functioning Class Rep system.  It has also empowered me to an extent, in that I feel more capable of taking on complex discussions and bringing up contentious issues in such a way that I don’t offend people, but can make them aware of the issues and be willing to help.

I was humbled, shocked and stunned to be nominated for and win the 2015/16 HISA Award for Best Class Rep.  I am so grateful that my class recognised the effort I put in to the position on their behalf and felt strongly enough to fill in the forms and nominate me.”

Find out more about becoming a Class Rep.